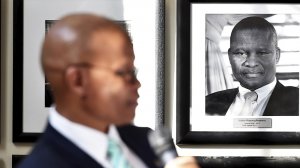 President Cyril Ramaphosa on Monday expressed his appreciation to outgoing Chief Justice Mogoeng Mogoeng for what he called a decade of outstanding service and leadership.

In a statement from the Presidency, Ramaphosa wished the retired Chief Justice well in his retirement and added that he left behind a rich legacy for the country’s democratic culture, judiciary, legal profession and ordinary South Africans.

“Today we pay tribute to Chief Justice Mogoeng for endowing South African jurisprudence and the democratic order more broadly with judicial integrity and resilience which has impacted positively on the lives of citizens and advanced accountability,” Ramaphosa said.

He added that Mogoeng’s leadership had inspired a judiciary that was fearless in holding those in power to account and empathetic to the plight of individuals and groups in society.

He said this had deepened international regard for South African jurisprudence, for the integrity, effectiveness and efficiency of democratic institutions, and for the separation of powers enshrined in the Constitution.

Ramaphosa noted: “Chief Justice Mogoeng presided over our judiciary during a decade which was challenging in many ways, but during which our judiciary held firm and enabled the renewal of our society.”

Sudan's Hamdok to review appointments made by military

Sudanese Prime Minister Abdalla Hamdok will review appointments and dismissals made by the military to key state posts, the General Secretariat of the cabinet said. After seizing power on October 25, Sudan's military rulers drew on veteran ex-officials of toppled leader Omar al-Bashir for important positions in the state bureaucracy. Hamdok, who was arrested during the coup and then reinstated under a deal with the military reached on Sunday, issued a directive to freeze all hiring and dismissals in state jobs. "In addition, all the appointments and dismissals that have taken place in the previous period will be placed under study, evaluation and review," said the secretariat. →