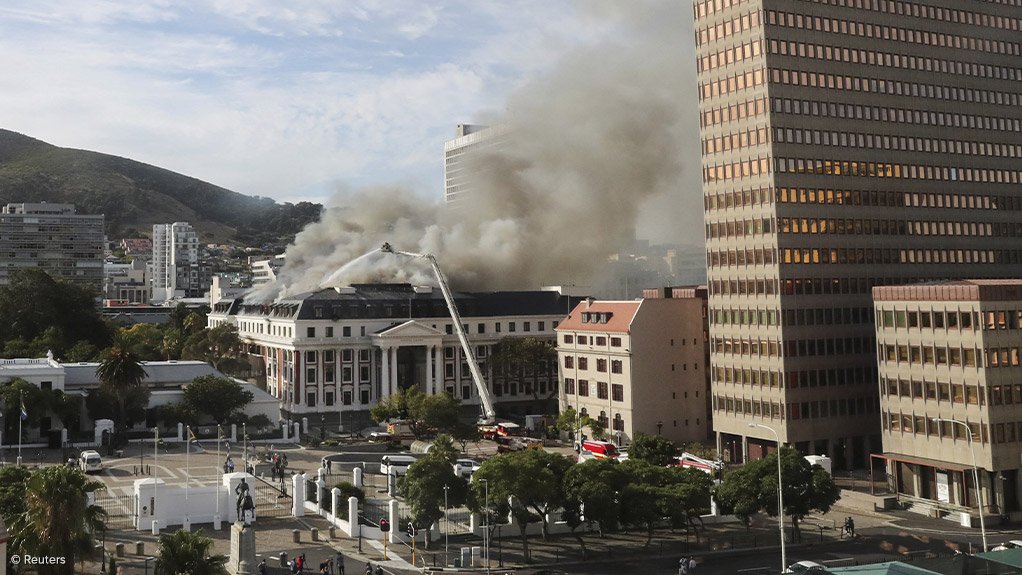 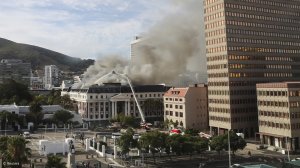 Four police officers have been suspended in the wake of the fire that gutted the historic National Assembly building.

On Friday, Lieutenant General Sam Shitlabane, head of the Protection and Security Services (PSS), briefed Parliament's Standing Committee on Financial Management of Parliament on the police's investigation into the fire.

Shitlabane said a departmental investigation had been instituted against officers who were on duty from 31 December 2021.

Lieutenant General Sehlahle Masemola, deputy national commissioner for policing, told the committee the four officers had been issued with a notice of suspension.

"They are busy with their representations, and that will be considered," he told the committee.

Twelve days before the 2 January fire, a power outage resulted in the malfunctioning of the video wall from where cameras on the precinct are monitored.

Police officers on duty at Parliament could therefore only monitor movement from a small screen due to the video wall not working.

The cameras inside the building are digital and those outside the precinct are analogue.

Shitlabane listed these and several other issues as inhibiting factors.

"The power outage, caused by Eskom, on 21 December 2021, resulted in the malfunctioning of the video wall for the entire duration, prior to the Parliament fire incident. It is reported that apparently the generators ran out of diesel. Members could only monitor movement from a small screen due to the video wall not working. Currently, Parliament is operating two different types of cameras," he said.

On the cameras, Masemola said: "The police were using a small monitor to look at what is happening outside. With the video wall, you can see much bigger, and in the absence of that video wall working, you are left with either a 22 or 20-inch monitor where you monitor the same work. We are not responsible for the repair of the video wall. We have reported it to the relevant authorities."

Parliament has three monitoring rooms, which are not integrated.

Acting director-general of the public works department Imtiaz Fazel said the generators were refuelled after the power outage.

"The water valves that supply water to the sprinklers within the building were found to be closed. The fire alarm only went off when the fire brigade was already on the scene and extinguishing the fire," he said.

He said after the declaration of the parliamentary complex as a national key point on 12 January 2018, a joint planning committee (JPC), which is a coordinating structure "in consultation with the protecting authority, still needs to be established by Parliament".

"Among the critical areas highlighted in the physical security assessments that are still pending, are the current height of the perimeter fence, which is 1.3 metres, as opposed to 3 metres as prescribed by minimum physical security standards, [and a] remote search park," he added.

Shitlabane said in 2016 Parliament's management and the divisional commissioner undertook a trip to Hungary in order to benchmark Parliament's security with international standards.

Africa will need at least $432-billion to address the effects of Covid-19 on its economies and on the lives of Africans — resources it does not have. This was according to African Development Bank President Dr Akinwumi Adesina who spoke during the release of the 2022 African Economic Outlook report. In the last year, Africa’s gross domestic product made a strong recovery, however, the effects of the Covid-19 pandemic, Russia’s invasion of Ukraine and the ongoing war could be medium-term challenges for the continent. The continent’s GDP grew by an estimated 6.9% in 2021, following a pandemic-induced contraction of 1.6% in 2020. The report warned that the effects of the conflict and pandemic could be felt over several years, and at worst, as much as a decade. →