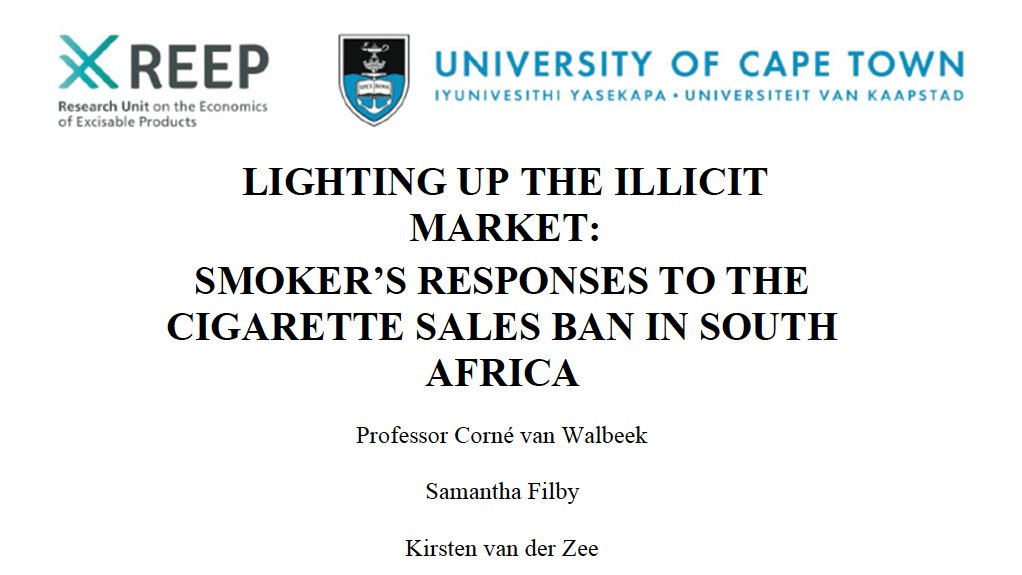 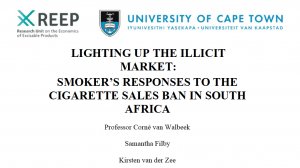 Cigarette sales have been banned since the start of South Africa’s lockdown on 27 March 2020, as cigarettes are not regarded as “essential products or services”. The ban has been controversial, attracting praise from public health groups and criticism from the tobacco industry and some members of the public.

Between 29 April and 11 May 2020 members of the Research Unit on the Economics of Excisable Products, based at the University of Cape Town, conducted an online survey among smokers to determine how they responded to the ban on cigarette sales during the lockdown, and to evaluate how the lockdown has impacted the market for cigarettes in South Africa. The survey was filled out by more than 16 000 respondents. From these responses, 12 204 analysable observations were derived.About 41% of smokers had attempted to quit smoking cigarettes during the lockdown.

Of those who tried to quit, 39% had successfully quit at the time they completed the survey, while 61% of those who tried to quit, were unsuccessful. Of smokers who successfully quit at the time of answering the survey, 12% intend to start smoking again after the cigarette sales ban is lifted.Cigarette consumption among smokers who did not quit increased marginally from an average of 10 cigarettes per day in the pre-lockdown period to 11 cigarettes per day in the first two weeks of the lockdown, but decreased to 9 cigarettes per day after the lockdown extension was announced.

Around 90% of survey respondents had purchased cigarettes during the lockdown. Many smokers had been unable to purchase their pre-lockdown brand. 46% of smokers switched from a multinational company (MNC) brand to a brand produced by a local producer. The MNCs are British American Tobacco, Philip Morris, Japan Tobacco International and Imperial Tobacco. The local producers are mostly members of the Free-trade Independent Tobacco Association (FITA) and include companies like Gold Leaf Tobacco Company, Amalgamated Tobacco Company, Carnilinx and Best Tobacco Company.

The purchasing environment changed dramatically after the lockdown. Whereas 56% of smokers purchased their cigarettes from formal retailers before the lockdown, this decreased to 3% after the lockdown. The percentage of smokers who purchased from spaza shops increased from 34% to 44%, and from house shops from 4% to 18%. Sales outlets that either did not exist, or that were inconsequential before the lockdown, but that became important sources of cigarettes during the lockdown include street vendors (26% of smokers), friends and family (30%), WhatsApp groups (11%), and “essential worker” acquaintances (10%).

This note summarises the findings of a private online roundtable held by the Humanitarian Policy Group at ODI with support from the British Red Cross on 26 May 2022. Participants comprised senior staff from key donor governments, international humanitarian organisations operating in Ukraine, and independent journalists covering the conflict. The discussion sought to understand the humanitarian narratives that are unfolding in the Russia–Ukraine crisis and how those narratives are impacting different approaches to the response and relationships between a variety of actors, and what influence the narratives have on the effectiveness of the response. Participants also shared ideas on what humanitarian organisations can do to influence narratives to maximise their positive effects. →