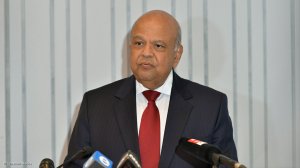 Lawyers for Public Enterprises Minister Pravin Gordhan have filed a review application asking the North Gauteng High Court to set aside a report by Public Protector Busisiwe Mkhwebane that found he flouted the Constitution.

In addition he will also ask the court for a declaratory order that Mkhwebane, who has had two reports set aside by the High Court already, did not act in accordance with the Constitution or the Public Protector Act.

The application was lodged on Tuesday morning in Pretoria.

In a notice of motion lodged at the court Gordhan's attorneys say he will ask the court to set aside both Mkhwebane's decision to investigate and the subsequent report as "unconstitutional, unlawful, irrational and invalid".

He will also seek a punitive costs order against Mkhwebane.

The report's findings relate to the early retirement of former South African Revenue Service (Sars) deputy commissioner Ivan Pillay. He retired before the mandatory retirement age in 2010 and receved full benefits. He was subsequently appointed on a fixed contract at Sars before resigning in the wake of Tom Moyane’s appointment as Sars commissioner in 2015.

Julius Malema, Economic Freedom Fighters (EFF) leader, last week warned President Cyril Ramaphosa against appointing Gordhan in his Cabinet, saying the public protector’s report must be respected. Gordhan is Ramaphosa’s spearhead in efforts to reform government and state-owned enterprises and as former minister of finance and commissioner of Sars is acutely aware of malfeasance and wrongdoing.

The EFF’s campaign against Gordhan and Mkhwebane’s report is considered by Gordhan’s supporters as part of a broader effort to prevent him from returning to Cabinet.

The court found that she neglected to consider evidence in the public domain, she narrowed the scope of the investigation and was either unaware of the powers of her office or incompetent.

An earlier report about Absa and the South African Reserve Bank was also set aside by the court, who found that Mkhwebane “does not fully understand her constitutional duty to be impartial and to perform her functions without fear, favour or prejudice.”

In her report about the Pillay pension issue Mkhwebane found that Gordhan flouted the law, procedure and the Constitution in approving Pillay’s application for early retirement with full benefits. She found that Gordhan did not have the legal authority to grant early retirement with full benefits and that he used the wrong legal provisions in doing so.

Mkhwebane instructs President Cyril Ramaphosa to take disciplinary action against Gordhan and Sars to recoup the pension payments made to Pillay. Both the presidency and Sars must report back to the public protector within 30 days.

In their submissions to Mkhwebane Gordhan, and other affected parties including Pillay and former Sars head Oupa Magashula, argued that Mkhwebane was mistaken in her conclusions and that she made factual errors as well as mistakes in legal interpretations. Both Pillay and Magashula have indicated they will also take the report in review.

The complaint was lodged by an anonymous person on 18 November 2016, days after charges relating to the pension arrangement against Gordhan, Pillay and Magashula were dropped and Mkhwebane succeeded Thuli Madonsela as public protector.

Then national director of public prosecutions Shaun Abrahams said he decided to withdraw the charges against the three men after representations were made to the National Prosecuting Authority.

In his final report into governance issues at Sars retired judge Robert Nugent also couldn’t find any irregularities related to Pillay’s early retirement, saying: “There is no apparent reason why Mr Moyane would be asking for an opinion on the lawfulness of Mr Pillay’s pension arrangement, when no issue had arisen around it…”

Gordhan’s attorneys have in the past extensively detailed the process that Sars and National Treasury followed before a decision about Pillay’s pension was taken, including legal opinions by Sars internal legal advisors as well as an external legal opinion and consultations with the director-general of the department of public service and administration.

Gordhan, then minister of finance, granted Pillay retirement with full benefits after a consultation period of three months.

South Africa's Covid-19 infections have increased by 4 215, bringing the total number of confirmed cases to 2 873 415 on Thursday. This, according to a statement from the National Institute for Communicable Diseases (NICD). →