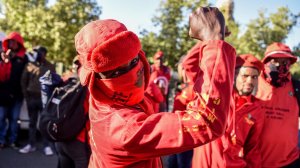 EFF leader Julius Malema told a group of supporters in Senekal in the Free State on Friday to "march into the town".

According to reports, many supporters are brandishing sticks, golf clubs and other items, including cricket bats and hockey sticks.

Buses full of EFF supporters arrived in Senekal earlier on Friday morning ahead of the bail application of Sekwetje Isaiah Mahlamba, 32, and Sekola Piet Matlaletsa, 44, who are accused of murdering 21-year-old farm manager Brendin Horner near Paul Roux on 1 October.

Malema's instruction comes after singing and short speeches denouncing farmers and organisations like AfriForum as "racist".

The matter, however, was postponed due to the hospitalisation of co-accused, Angelo Agrizzi, shortly after being denied bail in another corruption case before the Palm Ridge Magistrate's Court on Wednesday.

The charges relate to four tenders, worth roughly R2-billion, which the Department of Correctional Services awarded to Bosasa between May 2004 and December 2005, News24 previously reported.

The Committee to Protect Journalists said on Friday it had joined 35 other press freedom and human rights organisations in urging authorities in Guinea to keep digital communication channels open before, during, and after an October 18 presidential election.

Guinean President Alpha Condé, aged 82, who has been in power since December 2010 and was re-elected in 2015, is seeking a third term in office.

In a statement, the CPJ said a letter signed by the groups emphasized the importance of the Internet and other communication tools for journalists to safely report on the election and its outcome.