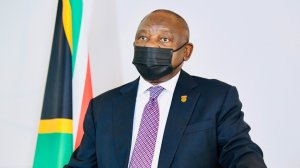 President Cyril Ramaphosa has declared November 1, the day of the local government elections, a public holiday.

He also reminded voters that they will only be able to cast their votes at polling stations in wards where they are registered.

He added that in the event that voters may consider travel, they will not be able to transfer their votes to voting stations away from their designated wards.

Msibi was taken into custody on Monday for allegedly being involved in a shooting at an African National Congress branch meeting in August, which left two people dead and another two wounded.

Ramaphosa called for the ANC to deal with the issue urgently, saying anyone who was charged in a serious criminal matter was expected to step aside.

Msibi has reportedly faced at least 10 criminal charges in recent years. Previous cases included charges of assault, some of which are still pending.