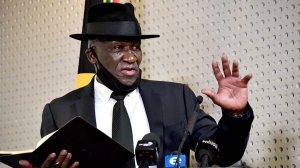 Police Minister Bheki Cele again denied that he said farmers should not complain if they get hurt.

Cele has come under fire following a recent spate of farm killings, including the gruesome murder of 21-year-old farm manager Brendin Horner near Paul Roux in the Free State last week.

SAA rescue practitioners assessing options of winding down versus liquidation

No meaningful progress can be made at South African Airways until the Department of Public Enterprises has signed a firm joint venture agreement with an experienced and strategic equity partner, according to a recent presentation to the ANC.

It has been reported that SAA's creditors will be updated as soon as the airline's business rescue practitioners have completed their assessment of the options of winding down the airline versus liquidation.

A total of R16.4-billion of historic debt owed by SAA to four local banks and guaranteed by the government is already budgeted for in the national budget - to be paid over a period of three years.

South African President and African Union chairperson Cyril Ramaphosa has thrown his support behind Nigeria’s Dr. Ngozi Okonjo-Iweala in her bid to become the first African woman to head the World Trade Organisation.

Ramaphosa said Okonjo-Iweala was highly distinguished African who had excelled in various public offices, in her native Nigeria, including responsibilities in the AU, and in numerous international assignments.

She was the first female and black candidate to contest for the presidency of the World Bank Group in 2012.

Like all countries, South Africa has been grappling with the deadly coronavirus, Covid-19, since it made its untimely appearance on the world stage earlier this year. Although it is tempting to put everything else on hold while acting to contain the virus and treat its victims, Covid-19 has highlighted and indeed reinforced the existing serious fault lines in South African society – from record levels of unemployment and a depleted fiscus to ever-deepening poverty and inequality. When the ... →