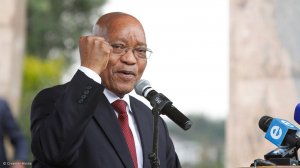 Making headlines: Zondo to lay criminal complaint against Zuma; Ramaphosa calls for Gender-Based Violence change ahead of 16 Days of Activism; And, Burkina Faso holds election under looming threat of violence

Chairperson of the Commission of Inquiry into State Capture Raymond Zondo has instructed the commission’s secretary to lay a criminal complaint against former President Jacob Zuma with the South African Police Service.

This follows Zuma’s walkout from the commission last week, without having been excused, after Zuma’s application to have Zondo recuse himself from the inquiry was dismissed.

Zondo reiterated that Zuma was not entitled to excuse himself from the commission and that he did so without permission, as the summons directing Zuma to attend and remain in attendance was still valid and binding and had not been set aside.

Zondo will summon Zuma to appear before the commission on new dates and an urgent application will also be made to the Constitutional Court to compel Zuma to appear in compliance with the new summons and to not leave without Zondo’s permission.

President Cyril Ramaphosa has called on South Africans to drive fundamental change in societal attitudes that allow sexism, chauvinism and patriarchy to thrive.

Ramaphosa was writing in his weekly column to the nation ahead of the 16 Days of Activism against Gender-Based Violence campaign which kicks off on Wednesday.

Ramaphosa admitted that despite efforts by international and local governments, gender-based violence was still a constant in the lives of millions of women and girls worldwide.

He urged South Africans, in the spirit of mutual respect and partnership, to make this year’s 16 Days of Activism campaign one that was impactful and one that made a difference.

And, Burkina Faso holds election under looming threat of violence

Polls closed in Burkina Faso on Sunday after a presidential and parliamentary election dominated by the threat of Islamist violence, prevented voting in hundreds of villages.

Polling stations were closed across the north and east where groups linked to al Qaeda and Islamic State operate. Some that had planned to open were shut because of threats, the electoral commission said.

Before election day, official data indicated that at least 400 000 people - nearly 7% of the electorate - were likely to be unable to vote due to polling stations staying shut for fear of violence.

That number could be far higher as many of the 1-million people displaced by unrest in the arid West African country have also found themselves unable to cast ballots.