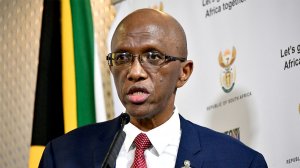 Making headlines: Makwetu hailed as gentle, unwavering giant in the fight against corruption, Ramaphosa says signs of Covid-19 resurgence in the Eastern Cape should be a wake-up call and, government urged to protect, advance rights of marginalised groups

Makwetu hailed as gentle, unwavering giant in the fight against corruption

Business Unity South Africa president Sipho Pityana has hailed outgoing Auditor-General Kimi Makwetu as a gentle and yet unwavering giant in the fight against corruption and maladministration, following the news of his death.

Makwetu died on Wednesday, at a hospital in Johannesburg, following his battle with lung cancer since 2016.

November 30 would have marked the completion of Makwetu’s seven-year term of office as South Africa's Auditor-General.

Earlier this month he was also appointed to the United Nations Independent Audit Advisory Committee.

Pityana said Makwetu brought to the country’s attention the symptoms, foundation and root causes of corruption.

President Cyril Ramaphosa says signs of a resurgence in Covid-19 cases in the Eastern Cape should serve as a warning to citizens to remain vigilant.

He said it should be a wake-up call and urged South Africans not to relax hygiene practises and social distancing.

Ramaphosa was addressing the nation virtually on Wednesday on the latest developments surrounding the country's response to the Covid-19 pandemic.

According to the president, in the last week, the number of new cases in the province was 50% higher than the week before.

Leading human rights lawyer and Foundation for Human Rights in South Africa executive director Yasmin Sooka has argued that the State is obliged to promote, protect and advance the rights of marginalised groups by advancing equality and non-discrimination, which goes beyond the legal and policy root.

Sooka said victims had an inherent and inalienable right to have the violations against them addressed, whether that be through investigations, documentation, prosecutions or reparations.