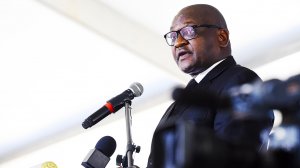 Gauteng Premier David Makhura survives another motion of no confidence

Gauteng Premier David Makhura has survived an attempt by the DA aided by the Economic Freedom Fighters and the Freedom Front Plus to unseat him.

ANC chief whip in the legislature, Mzi Khumalo, called the DA's motion of no confidence against Makhura "ill-conceived" after the sole Inkatha Freedom Party MPL, Bonginkosi Dhlamini, teamed up with the ANC to defeat the motion with 37 votes to a combined vote of 33 by the DA, FF Plus and EFF.

FF Plus MPL Anton Alberts said the fact that only four votes prevented the motion from being successful serves as proof of the ANC's waning popularity.

The total number of healthcare workers vaccinated under the Sisonke Protocol is 76 037.

Gauteng remains the most affected province with 26.7% of the total confirmed cases, which translates to 405 035 cases.

Diversified miner Glencore says the suggestion that it had involved President Cyril Ramaphosa, who used to be the chairperson of the Optimum coal mine, in the acquisition of Optimum Coal Holdings with a view to, or with the expectation of leveraging his influence to achieve amendments to Optimum’s coal supply agreement with power utility Eskom is "false and baseless".

This is in response to allegations made by former Eskom CEO Brian Molefe at the Zondo Commission on Tuesday.

Molefe claimed that Glencore had used its relationship with Ramaphosa to try to extort money from Eskom when the parties were renegotiating the CSA.