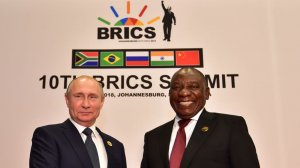 Russian President Vladimir Putin said that Russia was in the process of rerouting its trade towards countries from the BRICS group of emerging economies in the wake of Western sanctions over Ukraine.

Russia’s invasion of Ukraine has resulted in many European countries imposing sanctions against it.

Putin said Russia was discussing increasing the presence of Chinese cars on the Russian market as well as the opening of Indian supermarket chains.

A Just Energy Transition Partnership Investment Plan which will seek to unlock $8.5-billion in concessional climate finance to accelerate South Africa’s transition from coal to renewables is expected to be finalised by October for sign-off during the COP27 climate talks in Egypt in November.

The partnership which supports workers and communities currently reliant on the coal value chain is viewed as the crucial next step in the conversion of a Political Declaration signed at the COP26 climate talks in Scotland, last year between South Africa, and the International Partners Group of France, Germany, the UK, the US, and the European Union.

Libya's parliament-appointed Prime Minister Fathi Bashagha said his government supported removing all foreign forces and mercenaries from Libya, guided by a committee set up to safeguard a ceasefire after the 2014-2020 conflict.

In an interview in London, where Bashagha is trying to drum up support for his government to take over in Tripoli, the leader said he was a "big supporter" of the 5+5 committee which agreed foreign fighters should be expelled.

The 59-year-old said his government in the eastern city of Sirte had begun its work despite Abdulhamid al-Dbeibah, who was installed as prime minister last year through a UN-backed process, rejecting its move, leading to a standoff.