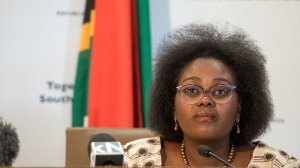 South Africa’s acting Health Minister Mmamoloko Kubayi said that despite Wednesday’s spike in new Covid-19 infections, the number of new cases has been on a downward trend, however, she did raise concern at the rise in new infections in the Western Cape.

On Wednesday, the country recorded more than 17 000 cases.

The Western Cape has now surpassed Gauteng in the number of new cases in the last 24 hours. Gauteng has been the epicentre of the third wave in the country.

On Monday the country hit 70 000 in Covid-19 deaths. Kubayi warned that for as long as the number of infections continue to rise, the death toll will continue to increase.

President Cyril Ramaphosa says it is time for South Africa to “grasp the nettle” and embark on a “transformative path” towards a climate-resilient society both to fulfil its moral obligations in the face of an intensifying crisis, but also to seize the economic and job opportunities that are arising around the transition.

Speaking during the third formal meeting of the Presidential Climate Commission, Ramaphosa said that, given the primacy of the climate crisis on the international agenda, South Africa could no longer be debating whether or not it should transition to a low-emissions society.

Although there were lingering questions about whether developed countries would honour their pledges to mobilise $100-billion a year in climate finance to support climate investment in developing countries, Ramaphosa said there were growing indications that funding would indeed be forthcoming.

And, Steenhuisen requests meeting about intelligence report on recent unrest

He said the meeting will offer Dlodlo the opportunity to set out the timeline of events leading up to the violence and looting, as well as the details of the reports and briefings that were given to NATJOINTS.

Steenhuisen added that it will also offer Cele the opportunity to explain how much information he was privy to, and why it took Crime Intelligence and the South African Police Service so long to react.

Citizen and Pariah: Somali Traders and the Regulation of Difference in South Africa – Vanya Gastrow

Many migrants in South Africa have set up informal spaza shops in townships across the country, supplying surrounding residents with essentials. These businesses have encountered widespread violent crime, animosity, and repeated efforts to regulate and curtail their economic activities. Engaging first-hand with Somali traders in Cape Town, Vanya Gastrow investigates the predicament of these modern-day pariahs – outcasts who belong neither to the elite nor the common people and who are frequently the focus of xenophobic anger. →