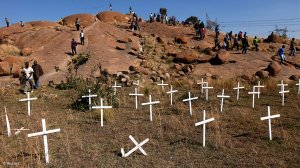 Making headlines: Ramaphosa welcomes court judgment, says he was not the cause of harmful conduct in Marikana, former Crime Intelligence boss Richard Mdluli released on parole and Senzo Mchunu says providing water should not be political

The Presidency has welcomed the recent court judgment clearing President Cyril Ramaphosa of any legal duty in the 2012 Marikana massacre.

Presidency spokesperson Vincent Magwenya said others have sought to create the false impression that Ramaphosa bears liability for the killings.

Thirty-four mineworkers were shot by the South African police while ten people, including six mineworkers, two Lonmin security officers and two policemen, were killed in the days leading up to the August 16 massacre.

In its judgment, the High Court agreed with Ramaphosa that the 359 miners who brought the case against the President and Sibanye had not established that Ramaphosa bore any legal duty in relation to the events that unfolded.

The Department of Correctional Services confirmed on Tuesday that former Crime Intelligence boss Richard Mdluli has been placed on parole after serving a third of his sentence.

Mdluli was serving a five-year sentence for the kidnapping and assault of his former lover Tshidi Buthelezi, her husband Oupa Ramogibe, and a friend Alice Manana, in 1998.

Because Mdluli committed the crime in 1998, he fell under the "Phaahla judgment" regime - crimes committed before 1 October 2004 - meaning that his eligibility for parole has been determined on a previous parole regime.

The Minimum Detention Period for Mdluli ended on 28 May 2022, but he could not be considered for parole at the time due to a pending court case, department spokesperson Singabakho Nxumalo said.

Senzo Mchunu says providing water should not be political

Minister of Water and Sanitation Senzo Mchunu has said that providing water should not be a political nor a rhetorical issue, but, rather, it should be a question of providing a basic service, which is a basic right.

Mchunu said the Impofu dam was currently at zero percent, while Kouga dam was estimated to have water for at least 112 days.

Water leaks were a major issue in the municipality, with 2 774 leaks fixed as of July 4, of the 3 700 leaks identified.

Mchunu said he was happy with the introduction of water tariffs in the municipality, which would guard against those who may not be complying with the water consumption limits.