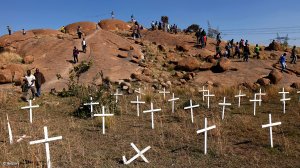 President Cyril Ramaphosa will not be called to appear before the Section 194 Committee handling Public Protector Busisiwe Mkhwebane's impeachment.

The committee received a legal opinion that Ramaphosa should only be called if his testimony is relevant.

Several African National Congress MPs, and Freedom Front Plus MP Corné Mulder said Ramaphosa's testimony would not be relevant to the committee's work, which is to determine whether Mkhwebane has misconducted herself or is incompetent.

Her legal counsel, Advocate Dali Mpofu, asked the committee to subpoena Ramaphosa after the president declined their invitation to appear before the committee.

The Inkatha Freedom Party today raised concerns about the slow pace of justice for Marikana victims, calling for progress reports from the South African Police Service and the Justice Department.

The IFP wants information on the status of the Marikana recommendations, as well as prosecutions, and further demanded that a reasonable deadline be established for the reports to be made public.

August 16 marks ten years since 44 people, including 34 mineworkers, were killed in the Marikana massacre.

IFP national spokesperson Mkhuleko Hlengwa said the party is deeply concerned that not only has the Marikana massacre left an indelible, bloody stain on the country’s democracy, but to date, there has been no real justice for the victims and their families.

Hlengwa pointed out that no police officer had been charged in the killing of the 34 mineworkers and he blamed a lack of political will to accept responsibility as a reason why families had not received justice.

And, Stage 2 load-shedding for Tuesday evening

Eskom has announced that Stage 2 load-shedding will be implemented from 4pm to midnight this evening.

There is also a high probability that load-shedding will require to be implemented during the same time on both Wednesday and Thursday evenings.

Eskom said the breakdowns of a single generation unit at Arnot Power Station and three at Tutuka Power Station during the last 24 hours, as well as the delays in returning units to service at Arnot, Kusile and Tutuka power stations have put a severe strain on the power generation system.

Currently, 4 550MW is out on planned maintenance, while another 14 182MW of capacity is unavailable due to breakdowns.

Over the weekend of 29-31 July, the ANC held its 6th National Policy Conference at Nasrec, Gauteng. These conferences are meant to be held approximately thirty months into every administration’s term of office, but this time round the COVID pandemic delayed the conference. Since the ANC is the governing party, and its decisions are likely to translate into national policy, they deserve close scrutiny. Before the conference, Stephen Grootes wrote as follows: “While the ANC’s policy conference is officially about the battle of policy ideas, there are strong indications already that the power contest(s) will overshadow debates around ideology and delivery. And yet, the policy documents published by the party ahead of its conference are important, as they give an indication of what officially the future direction of the party could be.” →