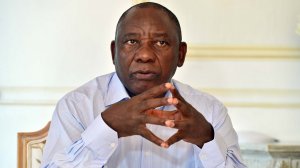 President Cyril Ramaphosa has admitted that members of the ANC were responsible for and allowed State capture.

In a broadcast, Ramaphosa said the State was captured and that as the Zondo commission of inquiry into State capture unfolded, clarity would become more apparent on that.

Ramaphosa said not many other political parties openly admitted their errors as the ANC has done. Many high-ranking ANC officials have already been implicated in corruption and other irregularities at the Zondo commission.

DA leader Mmusi Maimane says if black professionals don't put their faith in his party during next week's polls, they risk "exacerbating" the issue of black tax.

Black tax is a term coined to define financial support to extended family within black communities.

Maimane insisted the DA, which is the largest opposition party in the country, is the only real alternative that can help revive South Africa's ailing economy and build a capable state.

The National Prosecuting Authority has agreed to appoint a team of prosecutors to review high-profile police watchdog cases.

Delays in the prosecution of IPID cases, particularly high-profile cases was top of the agenda at the meeting. Senna also raised concerns about how the NPA handled some IPID cases prior to Batohi's appointment.

Economic Freedom Fighters leader Julius Malema on Thursday argued against President Cyril Ramaphosa’s plans to transition the economy to Level 3 of the national lockdown during the coronavirus pandemic and called for the lockdown to be extended by a further 12 months. Malema was addressing the media via a virtual media briefing where he said the EFF would only take into account scientifically proven methods for the lockdown. →