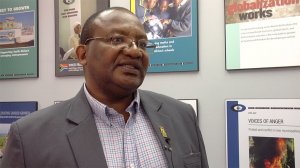 Speaking at a Centre for Development and Enterprise (CDE) panel discussion on the impact citizen organisations have on South Africa’s democracy, former national director of public prosecutions Advocate Vusi Pikoli said crime and corruption were a major threat to South Africa’s democracy and called for an urgent reduction in the level of crime in the country.

Pikoli, who co-authored the Khayelitsha Commission report and whose appointment as police ombudsman has been a positive outcome of the report, spoke strongly about the issue of communities who felt the need form their own civil groups to address their needs. “In Khayelitsha, the police were inefficient, which manifested as poor policing, poor investigation of cases and poor attitude,” he said.

While acknowledging that hostilities between the South African Police Service (SAPS) and communities were entrenched and historical, he noted that government would need to work with, and accept help from, non-government organisations (NGOs) in solving the issue of crime. “This is a legacy of apartheid and improper training. There is a need to professionalise the SAPS. The police service must be transparent and accountable in-order to build trust among citizens.”

He noted that citizens also wanted the right to recall an under-performing councillor, but red tape stopped them from doing so. “People need a voice and politicians need accountability,” he lamented.

“Citizens elect their own leaders because accountability is important to them. This indicates the need for a strong partnership between government, NGO’s and community based organisations,” he said.

He explained that the prime drivers of democracy could never be the courts or Commissions of Inquiry. These were simply the tools for citizens, organisations and civil society to use. “Where government is not true to the principles enshrined in the Constitution, it must be held accountable by NGOs to strengthen that democracy,” he said.

Some African National Congress national executive committee members are not convinced of President Cyril Ramaphosa's willingness to present himself before the party's integrity commission over the Phala Phala farm theft saga. News24 understands that an NEC meeting called over the weekend to, among other things, discuss the Eskom crisis, was used by some NEC members to question Ramaphosa's commitment to present himself before the party's integrity committee. An NEC member told News24 that some members confronted Ramaphosa, saying he was not prioritising the Phala Phala farm theft and the allegations against him. The NEC member added, "The president was urged to present himself to the integrity commission as a matter of urgency." →