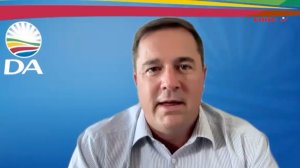 Leader of main opposition party the Democratic Alliance (DA), John Steenhuisen, said emphatically, on Friday, that blame for the country’s current energy crisis should be placed at the door of the governing African National Congress (ANC).

In an exclusive interview with Polity the DA leader said poor ANC policies have resulted in Eskom’s weakened state.

He referenced the ANC’s practice of cadre deployment, which he said had hollowed out the State-owned enterprise over the last decade and had even displaced qualified engineers and technical personnel.

“We don’t have an Eskom problem in South Africa. We’ve got an ANC problem. They are the government, they are directly the reason we’re sitting with the loadshedding crisis through their acts of omission and commission over the course of the last two decades,” he said.

The DA is also taking Eskom to court over the recent National Energy Regulator of South Africa’s (Nersa’s) decision to grant Eskom electricity tariff hikes. Steenhuisen said Nersa’s decision is not justifiable and he pointed out that “there are a number of areas where Eskom should be looking at to put itself in a better financial position”.

Furthermore, he said Eskom had been the site of major corruption in the form of huge price gauging on all procurement because of “mafia gangs” that have been placed at Eskom through cadre deployment.

Steenhuisen also shared that his party rejected the ANC’s suggestion that Eskom be moved to the Mineral Resources and Energy Department, headed by Minister Gwede Mantashe.

When asked about the impact of loadshedding on the agricultural sector, he said there had been very little action taken by Minister of Agriculture, Land Reform and Rural Development Thoko Didiza.

“There is going to be massive crop failure because farmers cannot irrigate their crops. Millions of chickens had to be destroyed and set aside because of the failure of electricity in the country. And it really affects every business but it is going to impact now on food security…,” said Steenhuisen.

He warned that more job losses could be on the horizon in a country with a 42% unemployment rate.

Steenhuisen is hoping that many South Africans will join his party as it prepares to march to ANC headquarters at Luthuli House on January 25 in protest at the energy crisis and silence from government on the matter.

He said Luthuli House was “the scene of the crime” as the ANC had centralised the power and functions of the State at Luthuli House.

“There is no use in us begging government to do the basic job it should be doing anymore, we’ve got to compel them now to do so and that is why we are marching and we are going to be taking legal action,” he said.