Apartheid, Guns and Money: A Tale of Profit

Apartheid, Guns and Money: A Tale of Profit 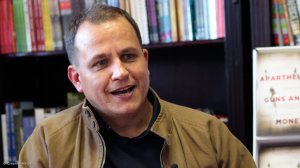 “van Vuuren shows that the struggle against corruption is indeed a human rights struggle and that, as we know from South Africa’s own history, it can be won. But it must be fought for.” – Jacob Dlamini, author of Askari

“This important book seeks to uncover one of the key secrets of the last decades of the apartheid era. [It’s] a timely reminder that the founding values of our new Constitution are key to building a democracy.” – Justice Kate O’Regan, former judge of the Constitutional Court of South Africa

“This is a crucial book at a vital time in our history. It is a must read!” – Andrew Feinstein, fromer ANC MP, author of The Shadow World

South Africa remains a deeply unequal society battling the legacy of apartheid and the persistence of corrupt networks that seek to ‘capture’ its democratically elected leaders. As Hennie van Vuuren of Open Secrets argues, in the absence of accountability, corrupt networks of the past stay in business. Rather than face justice, they invite members of the new elite to the table.

In over 600 pages, this meticulously researched book finally lifts the lid on some of the darkest secrets of apartheid’s economic crimes, weaving together a treasure trove of newly declassified documents and eyewitness accounts. This is an exposé of the machinery created in defence of apartheid and in support of sanctions busting and the people who profited: heads of states, arms dealers, aristocrats, plutocrats, senators, bankers, spies, journalists and members of secret lobby groups. In creating the apartheid arms money machine they were complicit in a crime against humanity. Whistleblowers were assassinated and ordinary people suffered. Finally, this network of profit is revealed.

In forging its future, a new generation of South Africans need to grapple with the baffling silence regarding apartheid-era economic crime and ask difficult questions of those who profited from it. This book provides the evidence and the motivation to do so.

Hennie van Vuuren is an activist, writer and Director of Open Secrets, focusing on accountability for economic crimes and human rights violations. He works from within civil society, challenging corruption and the abuse of power.