Ukraine war will get far worse before it gets better – Steenhuisen

9th May 2022 By: Sane Dhlamini - Creamer Media Researcher and Writer 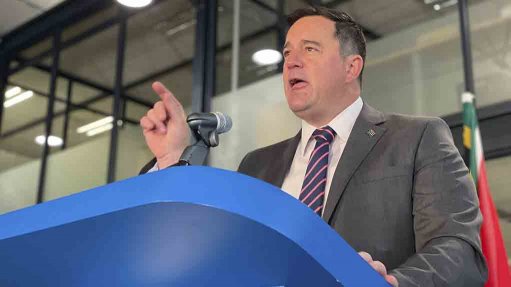 Back from his visit to Ukraine last week, Democratic Alliance (DA) leader John Steenhuisen said on Monday that the Russian aggression against Ukraine will get far worse before it gets any better.

Steenhuisen recently spent six days in Ukraine to see first-hand how war is affecting the country.

He said he made the trip to represent freedom-loving South Africans who were appalled by what the Russian military was doing to the people of Ukraine.

He said his message was to inform Ukrainians that the ruling African National Congress did not speak for the country but rather for its own narrow interests.

He said they were bewildered by South Africa’s stance on the war in Ukraine.

“I assured them that our government’s disgraceful stance on the UN vote and the shameless attendance of Russian functions glorifying the military parties on the day the invasion got underway is viewed as a stain on our country by the majority of freedom loving South African citizens,” he said.

He said the DA would not stop pressuring the South African government to change its stance on the war, to condemn the Russian invasion of Ukraine, to call on Russian President Vladimir Putin to withdraw his army and to call for the opening of the Odessa port where more than 30-million tons of exports were waiting.

Steenhuisen warned that ripple effects of the war were starting to be felt. He said South Africans were going to suffer, particularly the poor who could not afford any further economic hardship.

A sharp price increase in bread and milk would hit everybody hard in the near future, he said.

The DA leader said poor South Africans were one of the main reasons why government could not remain neutral on the war.

He warned that the effects of the war would go on for a long time even if the fighting stopped now, with the economic devastation and particularly the agricultural aspect, taking years to overcome.

“This is not a Ukrainian or even a European issue. This is a global issue,” he stressed.

Steenhuisen stated that Africa was dependent on Russia and Ukraine for their grain imports.

Ethiopia depends on Ukraine for more than a third of its wheat.

He blamed the South African government for turning a blind eye to the war rather than condemning it.

“I will not stop using my voice to raise awareness of  the war in Ukraine. The DA will continue to fight for a reduction in oil and sugar prices,” Steenhuisen said.

He called for all efforts to be directed towards fighting off rising food costs and warned that if that was not done, South Africa would experience the worst winter.

“We must choose freedom, democracy and the right side of history,” he concluded.