The Writing is on the Wall 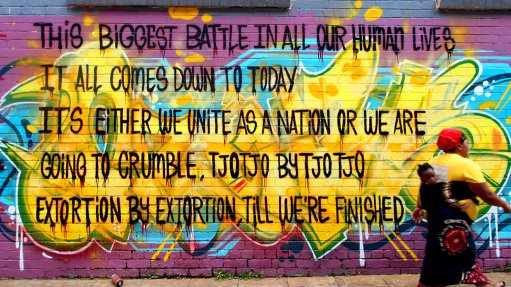 The Writing is on the Wall, it shows how throughout 2019, the public continued to expose corrupt individuals intent on abusing their power and looting public resources in key sectors. The 3 694 whistle-blower reports in 2019 highlighted how individuals were robbed of access to their fundamental right to safety and security and basic services through corruption in policing, schools, healthcare, and the mining sector, to name a few.

David Lewis, executive director of Corruption Watch, commented: ‘We release this report in the midst of a global and national crisis of unprecedented proportions. This crisis has thrown into sharp relief the deadly consequences of corruption, at this stage most particularly the corruption that has resulted in dysfunctional local government and that has devastated the public health and water sectors. Make no mistake: lives that would have otherwise been saved will now be lost as a direct consequence of corruption.”

We should not expect corruption to abate in the teeth of this public health crisis, added Lewis. “On the contrary, the crisis may exacerbate the abuse of power and resources that accompany the necessary relaxation of procurement regulations and the extension of emergency powers to law enforcement. As attention turns elsewhere unscrupulous elements in the private sector will engage in price gouging and procurement corruption.”

The public need to remain vigilant and committed to exposing corruption, Lewis cautioned, “even as life is dominated by the necessity to limit the spread of the virus. We remain ready to play our role.’