SANDF says it has returned unregistered Covid-19 drugs to Cuba 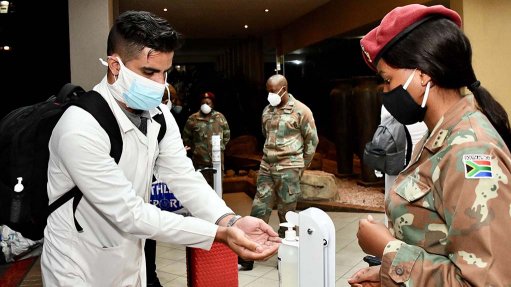 The South African National Defence Force (SANDF) has returned all the vials of the so-called Covid-19 miracle drug Heberon which it had procured and subsequently imported illegally.

On Wednesday, chief of the SANDF, General Rudzani Maphwanya, told Parliament that all vials of the Cuban-made drug had been returned.

"The SANDF indeed had an engagement with the SA Health Products Regulatory Authority (Sahpra). I want to indicate that we have returned all that was required to be returned. So we have not confined ourselves to the 500 000 vials. Sahpra has received a report so far," he said.

In December, Sahpra gave military bosses an ultimatum to provide evidence that the drug has been shipped back to Cuba, or face having it destroyed.

In April last year, the SANDF nearly spent more than R200-million to import Heberon Alpha R 2B, manufactured by a Cuban-Chinese company.

Interferons are proteins used in the body as part of its natural defence against viruses. The Interferon Alpha-2B is believed to be effective in the fight against the coronavirus. It is, however, not approved or registered for use in South Africa.

In April, News24 reported that the Department of Defence and Military Veterans could not account for the 970 000 vials of interferon it had imported from Cuba.

According to the inter-ministerial committee investigating the matter, Cuban state-owned company Tecnoimport had issued the SANDF with three invoices for the three consignments.

Dr Cassius Lubisi, a member of the committee, said the invoices were received by the Operation Thusano office in the logistics division of the SANDF.

"Invoice number S-0080 was issued on 30 April 2020 for the first consignment of 130 000 vials at a total amount of (USD) $2 015 000. This invoice was misclassified as payment for vocational training services under Operation Thusano and was initially recorded as such in the books of the DoD. This was subsequently corrected on 5 October 2020 and correctly classified as drugs under Operation Notlela. Invoice S-0080 was approved for payment by the chief of logistics Lt-Gen Jabu Mbuli on 30 June 2020 after his personal intervention with the budget management office on the same day," he said.

An amount of R33 496 973.60 was ultimately paid, as the invoice was based on the rand/dollar exchange rate on the day of payment.

Two other invoices for a second and third consignment have not been paid.

An invoice for the third consignment, dated 17 August 2020, totals just over $2-million.

He also said the Cuban Embassy in South Africa had written to then Defence Minister Nosiviwe Mapisa-Nqakula, requesting the return of 500 000 vials of the drug for urgent use in Cuba, "given the real risk that the interferon would expire before it can be used in South Africa".