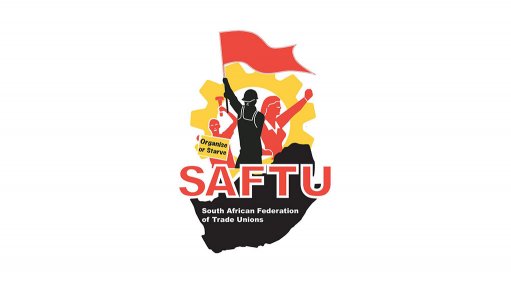 The South African Federation Trade Unions condemns the budget delivered by Tito Mboweni as a savage attack on the workers and poor. Instead it was  an attempt to appease international big business and the wealthiest South Africans.

He announced no increases in corporate taxes on businesses, said nothing about a wealth tax on the super-rich, and no rise in income tax, which is at least higher the more you earn.

Yet he imposed even more increases in taxes which are paid equally by rich and poor. The poorest South Africans are still struggling to pay last year’s  big increases in the fuel levy and so-called ‘sin taxes’ on alcohol and tobacco products.

Now they have to pay yet more, not only directly but as a result of the inevitable knock-on effect of the fuel levy increase - by 29 cents per litre for petrol and 30 cents per litre for diesel - which will push up prices in the shops and public transport. This will drive even more people in to poverty and will get minimal relief from the tiny R80 increases in social grants.

Mboweni also targeted jobs, with his statement that “the public wage bill is unsustainable” and that “provincial compensation budgets will be reduced by R27 billion over the next three years. The first step is to allow older public servants who want to do so, to retire early and gracefully”.

These soothing words hide a plan to butcher jobs in the public service, at a time when there is a desperate shortage teachers, doctors, nurses, community health workers and staff in all the other public services.

The budget also provided further evidence that the government is moving towards privatization of state-owned enterprises (SOEs), with his question: “Isn’t it about time the country asks the question: do we still need these enterprises?”

His comment that splitting Eskom into three parts will “set the electricity market on a new trajectory, and allow for more competition, transparency and a focused funding model”. [Our emphasis]

Eskom and other SOEs should not be seen as part of a ‘market’, run as port-making businesses, but as providers of essential public service. The promised R23 billion a year to financially support Eskom during its reconfiguration will be insufficient to keep it going, which can be the excuse to sell it off.

He also said nothing about recovering the money corruptly stolen from Eskom by its executives. SAFTU backs the call by Eskom NUMSA members for the immediate suspension of its top executives.

Another alarming feature of the budget speech was something he did not say - not a word about a budget for the government to implement its manifesto commitment to expropriation of stolen land without compensation.

Overall, just as SAFTU expected, the budget was delivered by a business representative who lives in a different world from the majority of South Africans. There was not a glimmer of appreciation of the desperate plight of the unemployed, the marginalized casual workers, subsistence farmers, single parents and all the others who struggle to survive every day.

Exactly as SAFTU predicted, workers and the poor will now yet again have to pay the price though tax increases and cuts in spending on key public services, which will lead to even more job losses in both the public and private sectors.

Mboweni is copying one of his predecessors, Trevor Manuel, who boasted in 2008 that he had achieved a budget surplus for the first time since 1958. As the federation said, he did this through exactly the sort of budget we saw today, which robbed us of the resources to meet the basic needs of the poor black majority who remain trapped in the apartheid racial fault lines.

This was definitely not the People’s Budget that SAFTU demanded but a big business budget for the rich. It was appropriate therefore that SAFTU’s programme of mass action began today with a march of thousands of workers and their allies, through the streets of Cape Town.

The next stage is the mass shut-down and even bigger marches on 26-27 March, which will demand an end to all the attacks on the jobs, living standards and public service for the poor majority of South Africans.