SA: Naledi Pandor: Address by Minister of International Relations and Cooperation, on the occasion of the media briefing on President Cyril Ramaphosa's visit to the United States of America (12/09/2022) 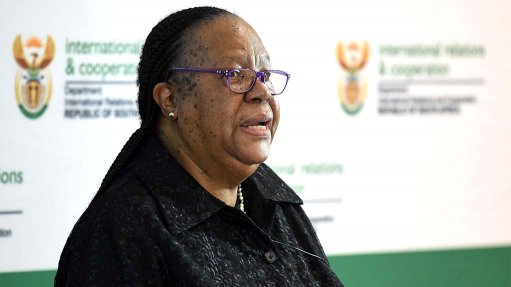 Good morning to you all, Members of the Media

We have convened this briefing today to inform you about South Africa’s participation in the High-Level segment of the annual United Nations General Assembly (UNGA).

The 77th session of the United Nations General Assembly (UNGA77) will take place at the United Nations headquarters in New York City from 20-27 September 2022 under the theme: “A watershed moment: Unlocking transformative solutions to interlocking challenges.”

Much of the focus of the high-level and side-meetings to be held at UNGA will focus on development matters, specifically health, education and the broader implementation of the Sustainable Development Goals (SDGs).

This year’s UNGA theme resonates with South Africa’s philosophy of working together as a global community to find solutions to challenges which affect us collectively. Inherent in collective solutions in the international relations context is multilateralism, which South Africa is an ardent proponent of in its foreign policy engagements.

UNGA77 is being held at a time when the world is characterised by geopolitical tensions, concerns around the proliferation of mini-lateral security pacts which, in part, replicate the work that should ordinarily be undertaken by the UN Security Council. Also, the world economy is under strain, and its ramifications on food, energy and finances require a united global response.

For the global South, the economic and socio-economic impact of COVID-19 has been disproportionate in relation to recovery in the developed North. The pandemic has exacerbated existing challenges including fuelling root causes of conflict, such as competition for scarce resources, while in the developed world, there has been recovery, but not at the pace that was anticipated.

Preceding the General Debate, the UN Secretary-General, Mr António Guterres, will convene a summit on “Transforming Education”. On the margins of the General Debate, the Secretary-General will also host a high-level meeting focussing on the Sustainable Development Goals. It is expected that this SDGs meeting will explore ways in which to regain momentum and accelerate the implementation of the SDGs.

Additionally, there will be several climate-related engagements focussing on the urgency of working together for climate action. The impact of climate change is unquestionable. For the developing world, climate impacts are significantly more pronounced. This is impacting directly on an already resource-constrained world, and it is imperative that we start building resilience immediately. These discussions will be a precursor to the UN Framework Convention on Climate Change (UNFCCC) meeting that is scheduled to take place in November in Sharm-el-Sheikh, Egypt.

Another equally important meeting that will take place will be one focussing on the Total Elimination of Nuclear Weapons. There should be no illusion that the threat of nuclear weapons constitutes a threat to humanity. The recent failure of State Parties to the Non-Proliferation Treaty to adopt an outcome following a Review Conference of the Treaty, is of huge concern, specifically the failure of nuclear weapons states to keep to their commitments to disarm.

The various engagements at UNGA will provide South Africa with an opportunity to highlight issues of national, regional and international importance. South Africa’s participation in the General Debate of the UNGA77 is a strategic opportunity for the promotion of our national and foreign policy objectives as espoused in Chapter 7 of the NDP, Positioning South Africa in the World.

The two leaders will discuss bilateral, regional and global issues of mutual interest, including trade and investment, climate change, food security, energy, and peace and security. President Ramaphosa will reaffirm the importance of the strategic and mutually beneficial relations between South Africa and the United States. The President will further emphasise the need for enhanced multilateralism and dialogue as the means through which the challenges facing humanity can be addressed. These include the urgent need to stimulate economic recovery in the wake of the COVID-19 pandemic.

Whilst in Washington DC, President Ramaphosa and his delegation will meet Congressional leaders and the veterans of the Civil Rights Movement who were instrumental in lobbying the American public against apartheid and who remain loyal to the cause of anti-racism in both the United States and South Africa.

South Africa and the United States enjoy historic and cordial relations. The US is a major export market for South Africa, a significant source of foreign direct investment (FDI), technology transfer, development assistance and tourism. Trade and investment relations take place under the auspices of the African Growth and Opportunity Act (AGOA), which grants duty-free and quota-free access to the US market for value-added products. AGOA has created jobs in both South Africa and the US and is thus mutually beneficial.

Let me conclude by emphasizing that South Africa’s foreign policy remains inspired by its history – and the country, working with others, strives for the attainment of a just, humane and equitable world. In conducting our international relations, we attach the utmost importance to the promotion of human rights, democracy, equitable justice and the rule of international law. The said principles place multilateral institutions, specifically the United Nations, at the centre of our foreign policy engagements and objectives.

The President’s visit to the United States provides us an opportunity to strengthen bilateral relations with the United States though the engagement with President Biden and to deepen multilateralism through the United Nations, which remains the primary vehicle through which the international community must confront the myriad challenges facing the world today.