SA definitely moving to Level 3 lockdown 'soon', the question is how - deputy minister 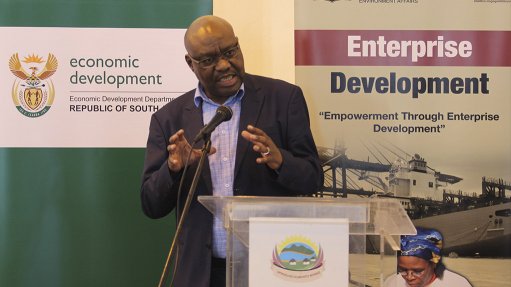 Government is in the advanced stages of consultation with health and economic experts which will result in the country 'soon' shifting to Level 3 lockdown, according to Deputy Minister of Trade, Industry and Economic Development Fikile Majola.

"The big issue facing government and the country now is how we move lockdown to Level 3. Government is holding consultations," Majola told Parliament's portfolio committee on trade and industry on Friday morning.

"We have received advice of moving to level three in some spaces and that is being considered by government."

The nationwide lockdown, introduced to slow the spread of the coronavirus, has now entered its eighth week. It was shifted from Level 5 to Level 4 two weeks, allowing slightly more economic activity and limited exercise.

Earlier this month President Cyril Ramaphosa announced that "most" of South Africa will be downgraded to a Level 3 by the end of the month. Government has not yet said which parts of the country will remain at level 4.

According to draft Level 3 regulations, tobacco and more retail products could again be sold, limited national air travel would be allowed, and mines would be able to scale up to 100% employment.

The lockdown has caused a sharp dip in economic activity, with projections for a contraction in SA's annual GDP ranging from between 5.8% to over 10%. On Wednesday the SA Reserve Bank updated its projection for a fall in GDP to 7% from 6.1%.

"Consultations have been going well and we should be able to move to level three without any hindrance. The president should be able to pronounce on that in due course and we will be able to further unpack the related regulations," Majola said.

Earlier this month, Ramaphosa said a "risk adjusted" approach was critical to saving the economy and people’s livelihoods while ensuring that the well-being of South Africans was not endangered.

Trade and Industry director-general, Lionel October, said on Friday while the department's first priority was to save lives and ensure the health of South Africans, the livelihoods of South Africans necessitated that the department seriously consider a move "to Level 3 and then Level 2 as safely as possible".

October said the department has already assisted companies with loans, and introduced an International Trade Administration Commission mechanism to regulate the export of medical equipment to ensure the local population is prioritised.

October said the Industrial Development Corporation approved 12 applications to the value of R476-million in term of the IDC's essential supplies Intervention programme. He said alert Level 4 regulations allowed for incremental opening up of e-commerce to goods not sold in brick and mortar stores.