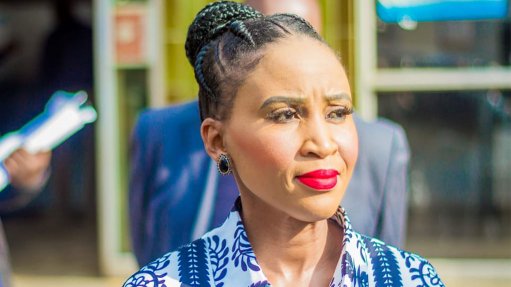 The Executive Mayor of the City of Johannesburg, Cllr Mpho Phalatse

Members of the Mayoral Committee present

Commissioner of the Sunshine Tour, Mr Thomas Abt

Over the last few weeks, the City of Joburg has played host to a number of premier local and international sporting tournaments across several sporting codes.

On the first weekend of November, we saw runners descend on the City to run the Soweto Marathon, also know has the People’s Race. I along, with the MMC for Community Development, Cllr Ronald Harris, completed the 10-kilometre race.

The next weekend, ‘the beautiful game’ saw the nation’s soccer legends go head-to-head in the Carling Black Label Cup, with Mamelodi Sundowns eventually lifting the cup after defeating Orlando Pirates in the final.

This last weekend was an opportunity for cyclists from around the globe to show their strength and fortitude by cycling up to 97-kilometres across Joburg on a beautiful Spring day. Although I did not compete this year, I had the opportunity of seeing the route and our beautiful City from the sky during a helicopter ride.

Now today, we launch another bumper sporting week for the City and the world, as we welcome the world’s top golfers to the City of Golden Opportunities for the Joburg Open, which is for the first time being played at this gorgeous facility in the heart of the City – the Houghton Golf Club.

This series of sporting events sends a bright signal that says not only is Joburg open for sport, business, and tourism, but that as a City we have the infrastructure, people and government that are full capable of pulling off seamless events of an international standard.

While I consider myself to be an on-and-off social golfer, there are some parallels between the sport and politics. For example, it often requires many early mornings, it can be lonely, it requires a commitment to a long-term strategy, you need to be able make calculated but quick decisions, and you must always be working to improve your performance.

This last point is captured beautifully by late American golf great, Ben Hogan, whose experience of the game was articulated, when he famously said, “The most important shot in golf is the next one.”

While as politicians we can be praised for the work that we do today, that goodwill from residents can quickly dissipate if we do not do the same or better tomorrow.

As a City, we are always improving due to the investment made by organisations like the DP World Tour and the Sunshine Tour. This is amplified by the relationship with the City of Joburg, which dates back to 2007, and I think we can all agree that together we have gone from strength to strength.

This tournament, which will be played over four-days, rightly positions the City as a world-leader in sporting events, with the tournament beamed to 53 countries and over half-a-million households, globally. Not only are our golfers on show but so too is the economic hub of South Africa.

On behalf of the City of Johannesburg, allow me to extend my gratitude to the City and Entity Officials who have made the 2022 Joburg Open possible, and the range of sponsors like our hosts, the Houghton Hotel, who have placed significant resources and time behind ensuring that the needs of the 156 golfers are taken care of, and tournament attendees are able to enjoy themselves in a beautiful and safe environment.

With those few words, I wish you all the very best, and welcome to Joburg. If it is your first time here, may it not be your last.

I thank you. Ke a leboga.