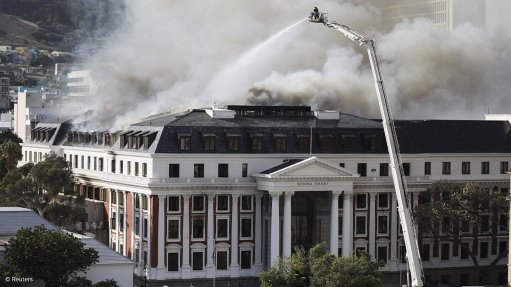 A report by auditors BDO, which was apparently hidden from Public Works and Infrastructure Minister Patricia de Lille, made damning findings about fire hazards at Parliament more than a year before a blaze gutted the National Assembly and Old Assembly wings of the legislature.

In August 2020, following a competitive tender process, the Department of Public Works and Infrastructure appointed an external auditing company, BDO, to conduct an independent assessment on the slow progress of Prestige refurbishment projects at Parliament.

This included the refurbishment of the NCOP building, including electrical installations, work on the Parliamentary Precinct, upgrades of office buildings, routine maintenance to Parliamentary Villages, and structural repairs to the Old Assembly Building.

BDO's final report was presented to the department in November 2020.

It made the following finding: "Ventilation system design and fire protection in the Precinct needs to be reviewed by a fire consultant."

This finding comes after a visit to the 90 Plein Street building, but the report stated: "This treatment plan should not be limited to 90 Plein Street, but also to all the other buildings in the Precinct."

Another finding of the report reads as follows: "During the site visit to the NCOP building and Tuynhuys on 21 September, it was noted that Tuynhuys is not fitted with an automatic sprinkler system and that the NCOP building's sprinkler system has not been operational for some time. Although these buildings might already comply with the regulations as set out in SANS 10400-T:2011 (South African Bureau of Standards, 2014), it should be taken into consideration that the purpose of this code is to save lives, not buildings."

"As these buildings form part of the National Heritage and are National Key Points, contains significant amount of wood, it is concerning that there seems to be no automated fire systems in place to protect these buildings from destruction in case of fire."

"The fire protection system of the NCOP building's library appears to be state of the art, but it is doubtful if this system would be able to protect the library in case the building should catch fire.

"If the rest of the building would catch file, the roof where the system's gas cylinders are stored, would also catch fire, as the structure contains a significant amount of wood."

Tuynhuys, the presidential office is Cape Town, is right next to the National Assembly building, which has been severely damaged in the fire.

In September 2021, De Lille released a statement, saying official had hidden the BDO report from her and that steps would be taken against them.

De Lille told Parliament's Joint Standing Committee on the Financial Management of Parliament that all systems were in working order ahead of the fire which broke out on 2 January.

Last week, the City of Cape Town's fire department released a post-incident report into the blaze that confirmed that the National Assembly sprinkler valve had not been serviced since 2017, and was closed at the time of the fire. The report also confirmed that the fire doors were latched open, which assisted in the spread of the fire.

Parliament has repeatedly said that these are only preliminary findings.