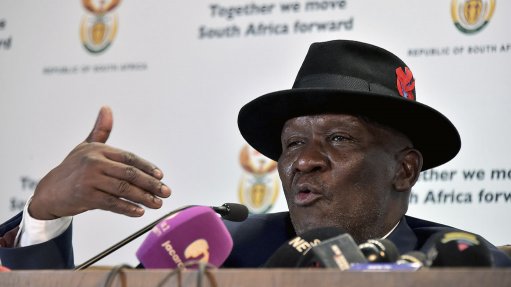 Police Minister Bheki Cele has revealed the country’s murder rate increased by 1.4% in the last year, by 303 more cases, half of the increase seen in 2018/19, with KwaZulu-Natal leading the national numbers in murders.

Releasing the national statistics Cele said his department was looking at strengthening resources to deal with murder which stood at 21 325 cases between April 2019 and March 2020.

While the crime statistics showed a reduction in violent crimes, the country was not where it wanted to be, he said, but added that the improvement in more stubborn crime categories was welcomed.

Robberies at residential premises decreased by 5.8%.

“The significant reduction in crime contributes positively towards police and community relations. When families feel safe in their homes, it builds and enhances the confidence in the police and the justice system,” Cele said.

Farm murders increased by 2 from the previous year and now stood at 49.

On the issue of stock theft, which had been on the increase in the past three years, Cele said his department interventions yielded positive results.

“. . .  stock theft is regarded as a serious crime to rural areas. The wealth for people in the rural areas is their stock,” he said.

The country has also seen an increase in hijackings with carjacking increasing 13.3%, a significant increase from the previous year’s -1.8%.

Cash in transit robberies recorded a decrease of 10.4% while bank robberies declined by 100%.

“This 100% sounds big. During the period under review there were no bank robberies in South Africa. However, in the same category, car hijacking and truck hijacking has recorded an increase of 13.3% and 1.7% respectively. Operational interventions have been deployed accordingly to address the growing increase,” Cele said.

“The campaign for gender-based violence and femicide must be intensified. Private sector and gender activist organisations must work together with the government to defeat the scourge,” he stressed.

On the 30 police stations with the most reported crimes, Cele said there had been a significant improvement in 12 stations which he said were obstinate over the past years.

“The dominating provinces in the top 30 stations particularly in murder and rape are KwaZulu-Natal, Gauteng, Eastern Cape and Western Cape. Western Cape recent crimes statistics also show us that specialised policing in targeting areas produced results. Additional resources on the Operation Lockdown and Operation Thunder and anti-gang unit in the Western Cape decreased the murder rate and overall serious crime in the province,” he added.

He boasted that for the first time in many years, Nyanga police station has recorded a 36.0% decrease in murder.

“For the last five years, Nyanga has been the capital of murder. This time because of the specialised approach, Nyanga has decreased 36%. Even last year there was a decrease. We are turning the tide against crime especially in that province,” he said.