Lockdown: Public still trusts Ramaphosa, but NDZ not so much, according to latest research 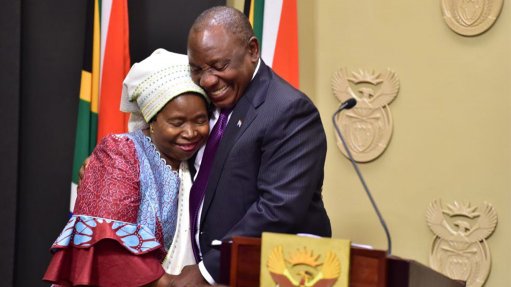 President Cyril Ramaphosa has the highest level of trust among South Africans, while Cooperative Governance and Traditional Affairs Minister Nkosazana Dlamini-Zuma the highest distrust, research by Ask Afrika has shown.

Public awareness levels around government communications has remained very high over the past four weeks.

South Africans trust the president and approve of his leadership; however, this trust has slightly declined over the past four weeks.

The government gets good ratings for communicating about the virus and stemming its spread.

Government ratings for reducing poverty are below average - residents in the Western Cape feel the strongest that government can do more to alleviate poverty during this time.

Most agree that private individuals are contributing more to vulnerable communities than business or government.

Concerns about food security have reached an all time high, with one in four people mentioning this as their biggest concern, research by Ask Afrika has shown.

This is closely linked to fears of unemployment and the subsequent loss of income.

A large proportion of South Africans are borrowing money and dipping into savings to stay afloat, while four in 10 people have made arrangements for later payment, and 25% have cancelled non-essentials such as car insurance.

A further 21% of people have applied for UIF for financial assistance and have not received a salary although they have been working during this time.

Over the past eight weeks, quantitative research was done using a 10-minute questionnaire administered in English.

A total of 3 657 interviews were conducted and the quota structure aligned with the proportions of the general South African population. The results for Week 8 were obtained from 19 to 25 May.

According to the survey, trust in Ramaphosa remains high and people want to receive information from him on a regular basis.

Most people trust the president to lead the country during the lockdown and believe that the he is taking lead to manage the country. This sentiment has, however, declined over the past four weeks.

More than 60% of people want to hear from the president at least once a week.

Further to this, 78% of people would like to receive frequent communication from Mkhize. Consistently, more than 60% of people noted that government is doing a good job in supporting its citizens during the lockdown.

Two in five people feel that government is not doing enough to reduce poverty, and 49% have not seen food parcels being delivered to the most vulnerable in their communities.

Communication efforts regarding government's initiatives could be increased.

More people feel that private individuals are contributing the most to vulnerable communities as compared to government or businesses.

Awareness of Covid-19-related corruption is high, with nearly 70% of people having heard, seen or read about it.

Many people don't know what to do if they or someone they know are affected by domestic or gender-based violence.

Further to this, one in three people feel that the government is not doing enough to support victims of these crimes during the lockdown.

Although most people understand the reason for the lockdown, frustration levels are high and starting to increase with more than 70% of people experiencing frustration.

The survey also found that almost half of respondents indicated that they take supplements such as vitamins and minerals to stay healthy.

In addition, the arrival of the Cuban doctors has been welcomed by many and seen as a valuable asset. Citizens perceive nurses and doctors to be dedicated and committed to their jobs during the pandemic.

Reputation is built through charitable acts and providing clean and safe environments for customers and employees. Government departments, Shoprite and Pick n Pay mostly impressed customers during the outbreak.

Some of the other findings

Awareness of Covid-19 symptoms remains high and similar to the start of the lockdown, with fever still being the most associated symptom with Covid-19.

One in four people don't have the means to obtain medical support if they contract the virus. It is expected that medical aids will do very well in this time, with fewer operations taking place and more new members joining.

The majority of citizens said they would maintain social distancing and hygiene practices even after the lockdown has been lifted. In addition, most people follow the basic preventative principles such as hand washing, sanitising and wearing a mask. Many implement stringent measures as fear of contracting the virus increases.

In terms of employment, 43% of people are temporarily not working due to the lockdown. Businesses are struggling to support employees, and many are facing retrenchments or salary reductions.

That said, the approval ratings of employees towards their employers are very high at 71%, despite 75% of citizens noting that their employers were affected by the lockdown.

After initially showing high levels of fear, citizens have for the past month plateaued on an emotion of "managing" and depression. Week 8 has shown a slight increase in emotional stress symptoms.

The youth continues to show the highest levels of fear and depression. The elderly are the most likely to experience comfort and note that they are "managing". They also have the lowest levels of depression.

Fear around the virus are high, but is more profound in the unemployed and part-time working groups.

From a provincial point of view, the North West (75%) and KwaZulu-Natal (73%) have the highest stressors around the virus. These two provinces are also showing slightly higher emotional stressors than the others.

Those 35 to 49 years old are showing the highest work stress, whereas the older generations (65+ years) are less concerned with social isolation.

Food security is low in South Africa with one in five adults going to bed hungry because of a lack of food.

Black South African households are significantly more likely to go an entire day without food. This is also more likely to happen in townships or informal settlements.

One in two adults reduced their portion sizes due to a lack of food and insufficient funds to purchase more. Men are significantly more likely to go to bed hungry.

Hungry adults are twice as likely to show signs of depression as those who are not showing signs of food insecurity.

The need for food parcels remains high and is seen as the most important way in which government can assist vulnerable communities, while only 10% indicate that they have received food parcels from government.

Nearly 50% of respondents noted that vulnerable people in their community had not received food parcels.

Many stay healthy by maintaining healthy eating habits while others must reduce meal sizes to survive the lockdown.

Cooking on open fires helps people to save money on electricity, and some use fresh fruit and veggies from their own gardens to save money at the shops.

Two in three respondents noted concerns about the increase of domestic and gender-based violence (GVB). This concern is more profound in suburban areas.

The North West and Western Cape are showing significant concern regarding this.

Women are significantly more concerned about the increase in domestic and gender-based violence, while 28% of respondents believe the government is not doing enough for GBV victims.

Healthcare workers are kept in high regard. The Cuban doctors sent to assist the country are also seen as valuable assets. Vitamins and minerals form an important line of defence against the virus - 45% of citizens have been taking supplements.

Exercise is also critical for mental and physical health. Many have well-prepared routines while others rely on household chores or don't enjoy exercising.

Consumption of frequently consumed snacks decreased during the lockdown period as compared to pre-Covid-19.

Two thirds of parents think that the 2020 academic year should be repeated. Seven weeks into lockdown, nearly half of all children have inadequate or no teaching access. Parents struggle with home schooling - about half have no resources or skills to help their children.