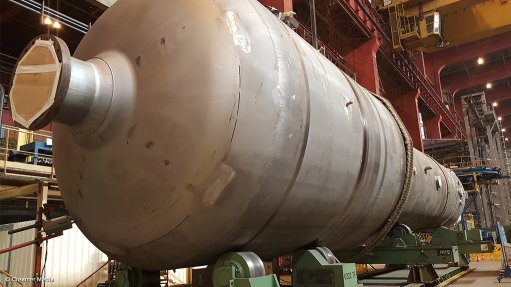 A steam generator being manufactured at Areva's Chalon/Saint-Marcel plant

French nuclear technology group Areva reports that 80% of the procurement associated with a contested contract to supply six replacement steam generators for Eskom’s Koeberg nuclear power station, in the Western Cape, has been completed and that 30% of the forgings have been delivered for manufacturing in China.

Eskom awarded the R4.3-billion Koeberg contract to Areva in September 2014, but Westinghouse Electric Company, which also bid for the contract, immediately cried foul and launched an expedited review application in the South Gauteng High Court.

The High Court found in favour of the State-owned utility, but following an appeal, the Supreme Court of Appeal (SCA) ruled in December that Eskom’s tender committee had acted unlawfully by taking account of considerations not included as adjudication criteria in the original tender.

The SCA did not, however, interdict the contract from proceeding and instead referred the tender back to Eskom for reconsideration. Nevertheless, Eskom approached the Constitutional Court in January in a bid to have the SCA ruling overturned, a move that is being opposed by Westinghouse.

Eskom CEO Brian Molefe has stressed previously that it is proceeding with the steam-generator replacement “not because there is going to be an outage, but because it’s the correct thing to do”. He notes that most other nuclear plants that operate 900 MW-series reactors, such as those deployed at Koeberg, have already replaced their steam generators.

Speaking during a recent media visit to Areva’s Chalon/Saint-Marcel plant, heavy equipment manufacturing line director Patrick Poret said that the contract was at an advanced stage.

He said the group was working in close association with Senpec, of Shanghai, China, where the Koeberg stream generators would be finally assembled ahead of delivery to South Africa.

“The procurement phase is already 80% completed and 30% of the forgings have already been delivered to Senpec for manufacturing,” Poret said, while pointing out various components being produced for the Koeberg contract during a factory tour.