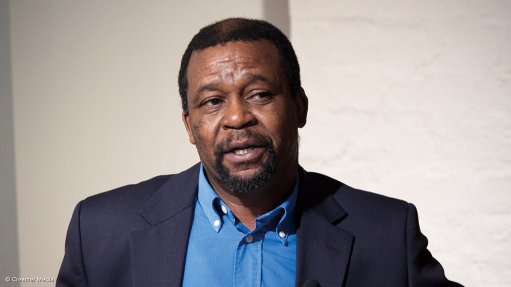 Executive director and board vice-chairperson of Mistra Joel Netshitenzhe
Photo by: Darlene Creamer

Mapungubwe Institute for Strategic Reflection (Mistra) executive director and vice-chairperson of the board of governors Joel Netshitenzhe stated that the July unrest and Covid-19 brought into focus the fundamental question of vision and ideation and legitimate leadership in the country.

He said the problem was not so much with the Constitution but the management of inter-governmental relations across the spheres and intra-governmental coherence within each sphere.

He pointed out “a stillness of the State” in pursuing national objectives, adding that joined-up leadership needed strengthening.

It had been a struggle since 1994 to transform the fragmented apartheid State, ensuring horizontal as well as vertical alignment in planning and in implementation, he said.

Netshitenzhe added that hopefully the District Development Model would be effectively implemented and a pilot agency at the centre of government would emerge with the authority and leverage to ensure that all fell in line.

He added that integration was even more critical now, given for instance worrying security trends emerging in the electricity sector and the multifaceted impact of the Covid-19 pandemic.

He said the two issues of trust and ideational leadership were attached to current challenges.

He said the slow pace of implementation of reforms and the unethical conduct uncovered in relation to Covid-19 resources undercut a large part of the goodwill that was starting to emerge.

Netshitenzhe explained that reforms did come with some pain as past mistakes were corrected and this could lead to popular dissatisfaction if poorly undertaken and poorly communicated.

“The past decade was a wasted opportunity, in my view largely because we spent an opportunity to start implementing a time-bound vision broadly agreed to in society. [The Mangaung conference of] 2012 was a kind of eureka moment because you would have to go back to the mid-90s to find a similar level of societal consensus,” he said.

Netshitenzhe added that the 2012 opportunity was squandered though and the trust since 1994 dissipated.

He said now the issue was whether the hope and trust of the post-2017 [Nasrec conference] period was receding, which is perhaps most visible in the outcome of the recent local government elections.

He explained that many had thought that departmental fiefdoms were fast disappearing post-2019 but the unedifying spectacle among security cluster ministries during the July unrest demonstrated that the hoped-for turnaround was still some distance away.