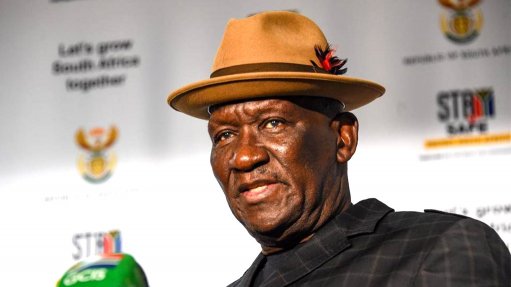 Police have identified three people of interest linked to the murder of a German tourist in Numbi, Mpumalanga, Police Minister Bheki Cele said on Wednesday.

"Police seem to have satisfied themselves in terms of the information they have collected from the family.

"They are not arrested; they are people of interest. We believe that we will be able to crack the case very soon," Cele said during a visit to the crime scene.

Cele said he had spoken to Tourism Minister Lindiwe Sisulu, who met with the German family at OR Tambo International Airport in Johannesburg.

"The family, especially the wife, would have loved to go back with the body of the husband. We are arranging that... We are speaking with the home affairs department to issue the death certificate.

"The provincial commissioner will be speaking to the doctor who certified the death, so that we are able to give the death certificate and we don't delay the family here in South Africa.

Cele conceded SAPS "does have a problem here [in Numbi]".

He said they had received 11 cases involving the robbing of tourists in the area.

"Fortunately, there have been no murders on those tourists. We have not done very well with arrests, only two arrests have been made."

He said the police's top brass would be looking into resolving the matters.

"The tourism here is a gold mine [and] if we can't take care of it, we will be killing the business around this area. It is important that all stakeholders in the province, the local government, the companies that run these lodges and the police all come together to work on this situation, especially in preventative measures.

"We have been given the information of the resources that might be needed by the provincial commissioner. If we can do the proper patrolling here, we might need between eight or 10 cars," he said.

He added that it was important to bring residents onboard.

"We believe the communities here would help, even those who have grievances."