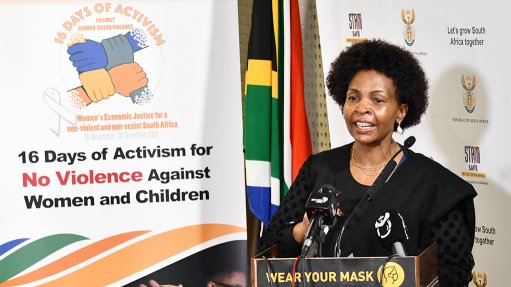 The Minister in the Presidency for Women, Youth and Persons with Disabilities Maite Nkoana-Mashabane said that gender-based violence and femicide (GBVF) is a manifestation of gender inequalities in society.

The Minister was speaking during the launch the 16 Days of Activism for No Violence against Women and Children Campaign in Pimville, in Johannesburg, on Thursday under the theme ‘Charlotte Mannya Maxeke, 16 Days of Activism – moving from awareness to accountability’.

The launch comes in the wake of shocking statistics released by the Gauteng Department of Health which revealed that more than 23 000 girls under 18 gave birth between April 2020 and March 2021. Of this, 934 girls were under 14.

Nkoana-Mashabane said GBVF was the second of two pandemics in South Africa. She also acknowledged that Soweto was among the top hotspots of GBVF.

“Today, we launch this year’s 16 Days of Activism for Non-Violence against women and children here in Soweto, the biggest township in South Africa. It is also important that we are here given that, regrettably, Soweto has been identified as one of the Top 30 Hotspots of gender-based violence in the country,” she said.

The Minister said that there should be accountability in attempts to address the violent scourge.

“In the spirit of moving from awareness to accountability, we are pleased that there have been interventions in place to address the scourge of GBVF. At the heart of these interventions is the need for collaborative approaches at societal level through strengthening partnerships across all networks and communities,” she said.

The National Strategic Plan on Gender Based Violence and Femicide was adopted by Cabinet in 2020 as a blueprint to decisively tackle the gender-based violence pandemic. It provides coordinated interventions to address the challenges that continue to threaten the livelihoods of women including inequality, and a lack of women’s economic inclusion.

The Minister further said that the IMC was hard at work in accelerating the implementation of the National Strategic Plan (NSP) on GBVF, adding that government cannot do it alone and that it needed help from social partners including civil society, the private sector and community organisations.

The Department of Women, Youth and Persons with Disabilities is conducting multi-sectoral consultations with communities across all nine provinces as part of building ownership on the establishment of the council.

“Part of our commitment to strengthening partnerships with civil society, the establishment of the National Council on GBVF is paramount in promoting collaboration in influencing policy and implementing the NSP,” she said.

Article 5 of the 2019 GBVF Declaration, adopted by government and civil society, calls for the review of existing laws and policies to identify gaps and ensure they are victim-centred and responsive. The adoption of the three GBV-related Bills by Cabinet in 2020, seeks to ensure the criminal justice system is responsive to GBVF-related matters and that the human dignity and safety of victims of violence are protected at all times.