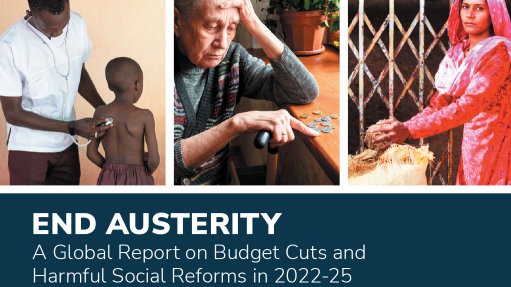 This report exposes the dangers of a post-pandemic austerity shock, far more premature and severe than the one that followed the global financial crisis.

It finds that 143 countries - including 94 developing nations - are implementing policy measures that undermine the capacity of governments to provide education, healthcare, social protection and other public services.

In effect, 85 per cent of the world’s population will live in the grip of austerity measures by 2023. This trend is likely to continue until at least 2025, when 75 per cent of the global population (129 countries) could still be living under these conditions.

Austerity measures include scaling down social protection programs for women, children, the elderly and other vulnerable people, leaving only a small safety net for a fraction of the poor; cutting or capping the wages and number of teachers, health and local civil servants and eliminating subsidies; privatising or commercialising public services such as energy, water and public transport; and reducing pensions and workers’ rights.

Instead of harmful austerity measures (or “fiscal consolidation”), the report argues that governments must urgently identify alternative financing options to support their populations that are coping with multiple and compounding crises from health, energy, finance and climate shocks to unaffordable living costs.

(i) presents the incidence of budget cuts based on IMF projections in 189 countries until 2025;
(ii) reviews the latest 267 IMF country reports to identify the main austerity measures being considered by Ministries of Finance and the IMF in each country; and
(iii) presents alternative financing options, ultimately calling on countries to end austerity by creating fiscal space to finance a people’s recovery and progress toward human rights and the Sustainable Development Goals (SDGs).