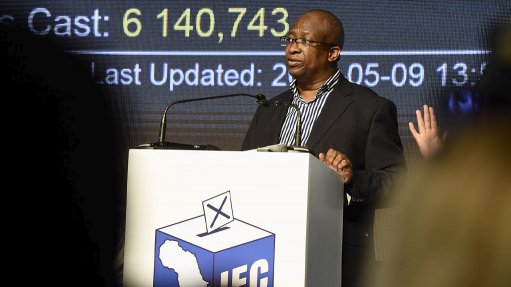 The Electoral Commission of South Africa (IEC) said a proposal to pilot e-voting in upcoming by-elections and next year's local government elections had fallen flat, as the country did not have sufficient funds.

In an engagement with the South African National Editors Forum (Sanef) on Wednesday, chief electoral officer Sy Mamabolo said political parties did not appear to be in favour of electronic voting.

"We as the IEC wanted to have a pilot run in the by-elections and perhaps in certain districts during next year's elections, so that we can use the experience from that pilot to plan for perhaps a rollout in 2024. However, our submission for funding has not yielded a positive outcome and therefore even the possibility of a pilot at this stage, given the perilous state of public finances, appear not possible," he said.

In June, the IEC told Parliament that it was considering e-voting, but did not provide details.

Mamabolo said there were numerous options for electronic voting that South Africa could consider.

He said that rough ideas included voting machines not linked to the internet to reduce the risk of hacking and other attacks.

The second option was a voter verifiable audit trail, where the voter voted on the machine which printed out the ballot that was then placed in a physical box.

This would be validated by randomly selecting voting stations and comparing ballots against the results from the machines.

"This will require huge public investment initially. To purchase all of these things in sufficient quantity," Mamabolo said.

He could not say when South Africa would be able to afford this.

"As to when South Africa will have the money for this? Frankly, I don't know," Mamabolo said.

The IEC said it was not advocating for or against composite elections, where national, provincial and local elections happened on one day.

IEC chairperson Glen Mashinini said it was up to Parliament to decide on this.

The commission could only empower Parliament with information as to what it would mean technically.

Both the African National Congress and the Economic Freedom Fighters were in support of composite elections that would require a change in the law.

Mamabolo said practically this would result in voters having to make their mark on five ballots.

He said this would also affect whether the IEC could announce election results within seven days.

The IEC was also looking at hosting by-elections late in November or early December.