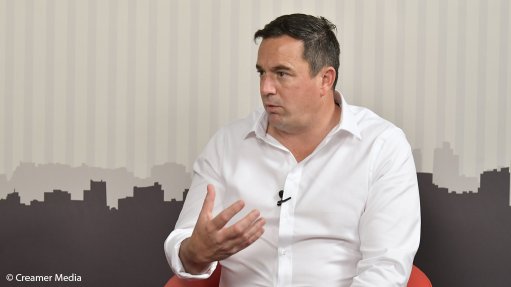 It is great to be with you here in JB Marks Municipality. And thank you for coming to meet with me today.

This is a strategic municipality for the DA, because there is an outside, but real, chance that this municipality could be run by the DA from 2 November.

And what a marked difference that would make to the trajectory of this municipality.

The people gathered in this room are some of the main movers and shakers in this municipality. I believe if we work together, strategically, it is within our power to save JB Marks from its downward spiral under the ANC and start to rebuild it under the DA from 2 November.

In August 2016, the DA won 32% of votes in JB Marks. Just 10 percentage points short of being able to lead a governing coalition. The ANC won this municipality with the slimmest of majorities – just 50.9%.

Five years later, and they have nothing to show for the trust placed in them by voters, other than a general sense of decay, crumbling infrastructure, and an ex-Mayor facing criminal charges for theft and fraud.

As you may know, I toured the North West Province extensively about a month ago. So I’ve seen for myself the state of decline, and the level of deprivation suffered by people here, due to ANC corruption and failed governance.

And just this morning, I have visited some places in Potchefstroom.

I’ve seen for myself the extreme poverty suffered by people living in Ikageng, where sewerage spills and unreliable basic services are the norm.

I’ve seen the Disaster Management Centre in Potch Industria, standing unfinished despite millions spent on this project. (The real disaster, of course, is the ANC.)

I’ve seen the Railway Station which was once regarded as one of the best on the continent, for its architectural features and beautiful layout. And I’ve heard how people are keen to restore it, but ANC-run PRASA stands in the way.

I’ve been to the Walter Sisulu Pedestrian Mall, which used to be a prime business hub, but is now a hub of crime and grime. Lights are broken, CCTV cameras no longer function, illegal dumping is rife, and infrastructure is crumbling. Predictably, some businesses are moving out, taking precious jobs with them.

I’ve visited the President Pretorius museum, which collapsed last year due to a lack of maintenance.

I’ve visited the Agricultural College, which was one of the best in the world. Now Selborne Hall is unsafe to enter. The grounds are lying fallow with dilapidated buildings and no plan to repair or revitalize the College.

I’ve learned about raw sewage from the industrial area flowing directly into the Prozesky Bird Sanctuary and the Mooi River.

And I’ve seen the ANC’s billboard outside the SASSA offices, with President Ramaphosa proudly claiming that JB Marks is the best-run ANC local municipality.

Well, we know that’s not true. We know that JB Marks is in fact one of the 64 municipalities classified by the Department of Local Government (CoGTA) as dysfunctional.

Worse still, it is one of 26 of these that are under administration. Which is unsurprising, given that about R3.5 billion was lost to unauthorized, irregular or wasteful expenditure last year.

But on the subject of best-run municipalities, let me tell you what is true. It is true that the top 5 local municipalities are all DA-run.

And it’s also true that 12 of the top 20 are DA-run, while 14 of the top 20 are in DA-run Western Cape. This is according to both Ratings Afrika and News24’s Out of Order municipal ratings index, both of which are independent.

And if the DA wins JB Marks on 1 November, it will very soon be the best-run municipality in the North West.

Why am I so confident of this?

Because we have a winning formula that we apply wherever we govern. We appoint people on their ability to deliver to people rather than on political loyalty, we spend public money on the public, and we partner with the public. It really comes down to those three things.

That’s how the DA get things done.

Just compare the university towns of Stellenbosch and Potchefstroom.

DA-run Stellenbosch is making progress, delivering services and housing, protecting and maintaining heritage sites, and attracting job-creating investment. It is also in a race with Cape Town to become the first municipality to end load-shedding.

Meanwhile in ANC-run Potchefstroom, we see the same general decay evident all across this beleaguered province. Heritage sites are crumbling from neglect. For years there’s been no provision of social or subsidized housing. Even private provision of housing is hampered by municipal incompetence and corruption. The local economy is stagnating due to lack of basic service delivery, causing unemployment to soar.

And don’t get me wrong.

I recognize that there are civic organisations and NGOs and active citizens here in JB Marks who want to make a difference. They want to contribute their energy and creativity to this municipality. They want to fix and rebuild and invest.

They don’t lack commitment. They lack a partner in local government.

Take the Potch Pothole Project, where community and business members are funding the repair of potholes across town.

If JB Marks had a functioning DA government, there wouldn’t be a need for residents and business owners who already pay rates and taxes, to have to contribute over and above to the basic maintenance of infrastructure.

DA local governments create the enabling environment of well-maintained infrastructure so that residents and businesses can do what they do best: innovate, invest, build, and create jobs.

But DA governments don’t just focus on getting the basics right. They also look to go above and beyond, and step in where the ANC national government is failing, to protect residents from our collapsing state.

DA governments are seeking to protect residents from water-shedding and load-shedding by augmenting bulk water supplies and buying electricity direct from independent producers.

The fact is, voters in JB Marks have a simple choice. On 2 November, they can wake up to another five years of ANC mismanagement at the local government level. Or they can look forward to five years of repairing and rebuilding under the Democratic Alliance.

But let’s be clear. We can’t do this in a weak or unstable coalition. Only those towns where the DA has a full majority, or a strong coalition, experience the real DA difference.

So we need to win 10 percentage points off the ANC. This is not impossible. There is a real chance that the DA could run JB Marks from 2 Nov. But we’re going to need every single vote we can get.

So please vote DA and get your communities to vote DA on 1 November so that we can rebuild JB Marks together.