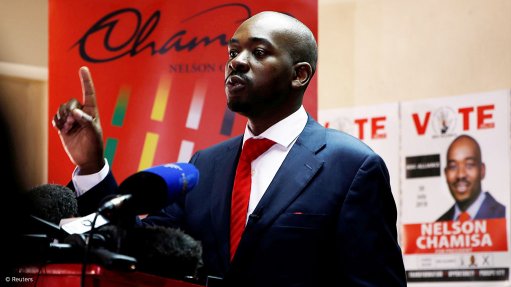 Zimbabwean opposition leader Nelson Chamisa on Wednesday, said the MDC Alliance is not going to boycott elections, which he said are being threatened by electoral fraud.

Chamisa told a press conference that the Zimbabwe Electoral Commission (Zec) would preside over a flawed election because it is biased and was working in cohorts with ruling party, Zanu-PF to aid their victory.

“It is clear we have a Zec that is biased. It has lost the confidence and trust of the people of Zimbabwe. We have a Zec that has thrown away the whistle as a referee and decided to join another team.”

The other team, the MDC Alliance presidential candidate claimed, is Zanu PF.

“There has been a clear and consistent negation of standards ... Even at this stage, information on the number of ballots printed, where they were printed and their security remains unknown,” he said.

Chamisa said despite the clear threat of electoral fraud, he would win the elections, adding that Zanu PF, because of fear, had been trying hard to provoke the opposition to a position of despondency that will lead to anarchy.

“We know them and from our intelligence, they are panicking and afraid of an election. [Zanu-PF and Zimbabwean President Emmerson] Mnangagwa knows that defeat is starring in his face,” he said.

The opposition leader assured Mnangagwa of safety under his administration if he wins the July 30, elections and also implored him to graciously accept defeat.

“We want to assure [Mnangagwa] him that he has nothing to fear. He has done his part. He should not be afraid of the inevitable. Victory is certain," he said.

“He must be there to accept defeat in magnanimity. And we are ready to embrace him as we go forward as a citizen, a former president and a liberation icon.”

Zimbabwean elections under the regime of former president Robert Mugabe were characterised by electoral fraud and violence.

But after taking over power from Mugabe through a military coup, Mnangagwa pledged to hold free and fair elections for the country.

He invited international observers, who include the European Union and Commonwealth, to evaluate the elections.