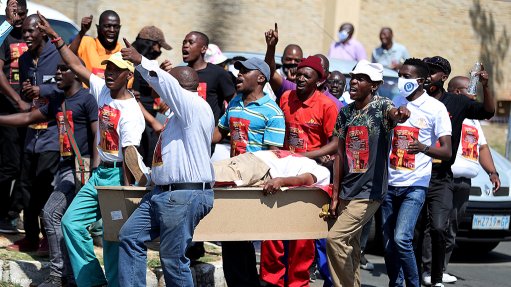 Undertakers on Wednesday morning brought the N2 into Cape Town to a standstill, placing coffins on the road as a convoy of protesters made its way into the city centre.

The action is understood to be part of the three-day national shutdown of services by the funeral industry, led by the Unification Task Team (UTT) – a grouping of 17 funeral associations and forums – which started on Monday.

City of Cape Town traffic services spokesperson Richard Coleman said a group of about 100 undertakers, making their way to the Department of Home Affairs in Cape Town, had stopped on the N2 incoming at Airport Approach Road and placed coffins in the road.

Authorities were on the scene.

The protesters later continued on their way to the city with no further disruptions, he said.

UTT said the action was being taken as government had not done enough to ensure the industry was diverse and transformed, arguing that since 1994, the industry was still dominated by "white minority capital" and a handful of "black elites".

Among the task team’s demands, were for the outsourcing of mortuary facilities to be recognised and legalised; a Covid-19 relief fund for the funeral industry; municipality by-laws to be amended to accommodate the building of bulk or cluster or complex storages; and for funeral undertakers who didn't own a certificate of competence, to write a designated number examinations and for funeral directors to be allowed to appoint a proxy to conduct some of the duties on their behalf.