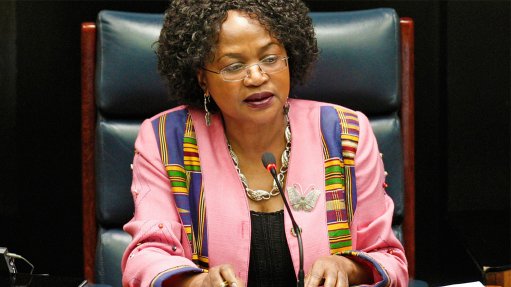 The answer from then speaker Baleka Mbete is decisive: "No."

And nothing is more ridiculous than Luthuli House instructing Parliament on what to do, according to Mbete, the party's former national chairperson.

Mbete testified before the Zondo Commission late on Tuesday late afternoon, going into the early evening, as the inquiry continued its workstream on parliamentary oversight.

Current Transport Minister Fikile Mbalula complained at a national executive committee meeting (NEC) in 2011 that the Guptas congratulated him for his pending Cabinet appointment before he knew he would be appointed.

"The fact that the NEC was told something, in fact, just gives it the status of a rumour," Mbete said.

Mbete admitted that Guptas' wedding party's landing at the Waterkloof Airforce Base in 2013 got her attention. At the time, she wasn't at Parliament but was working at Luthuli House.

In 2016, the ANC used its electoral muscle to block a DA motion to establish an ad hoc committee into State capture.

Mbete said ad hoc committees were only to be used as a last resort and that the portfolio committees should have investigated it.

"There is no magic in an ad hoc committee," Mbete added.

Freund said there was "overwhelming evidence" before the commission that by March 2016, there was enormous public concern about state capture and corruption.

She said it couldn't be argued that they were sitting around doing nothing while they knew what was going on regarding State capture. There were "rumours, [but] no concrete information or understanding".

She said MPs "probably didn't understand as much as we do now". But Freund said this didn't bear scrutiny.

"What also doesn't bear scrutiny is the failure of committees to investigate," he added.

Mbete responded: "You don't just take something because someone has said [it] and plunge into Parliament."

She recalled that, when she was still deputy speaker, she found an anonymous document about the arms deal which someone had slid underneath her door. After "applying her mind" for hours, she didn't do anything because it was anonymous.

"Parliament is very busy," she said, suggesting that it didn't have time to investigate rumours.

Deputy Chief Justice Raymond Zondo, who chairs the commission, said Parliament couldn't expect the kind of evidence required in court before it did something; the question was when it started investigating.

Mbete said Parliament is a political environment and MPs might fear for their political careers.

"That's always a consideration in Parliament," she added.

Eventually, Parliament started doing something. In June 2017, the House chairperson in charge of committees, or chair of chairs as it is known in Parliament, Cedric Frolick, sent letters to four committees instructing them to investigate State capture.

Mbete said she didn't have a specific recollection of this but agreed that it was the right thing to do. She said it was something the presiding officers and the ANC's political committee – a committee of senior MPs guiding the party's activities in Parliament – would have spoken about.

At this time, the Gupta Leaks had already broken and there was an unprecedented level of public mobilisation.

"I told a colleague that it was the first time I saw white people toyi-toying in the streets," Mbete said, eliciting a smile from Freund.

Freund put it to her that Parliament was under an obligation to hold the executive to account. "Can you explain why this didn't happen in 2016?" he asked.

"It is simply untrue to say that the Fifth Parliament sat through massive amounts of corruption and did nothing," Mbete testified.

She added that the response might have been inadequate but that this is due to the legislature's insufficient resources.

"I do not deny that there have been failures."

She said a lot more could have been done if they had the resources.

"It's good that we now know what we know so that we can correct it."

Zondo said it was an important issue: "Parliament's constitutional obligation to hold the executive to account is very important for the country."

He said everyone knew there were constraints.

"[From] what I have been hearing, it looks like that there is a lot of room for improvement in terms of resources."