You Have Struck a Rock: Women fighting for their power in South Africa – Gugulethu Mhlungu

You Have Struck a Rock: Women fighting for their power in South Africa – Gugulethu Mhlungu 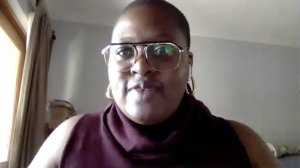 Gugulethu Mhlungu on her book 'You Have Struck a Rock: Women fighting for their power in South Africa'. (Camera: Kutlwano Matlala; Editing Nicholas Boyd)

Drawing on the experiences of women ranging from political activists to domestic workers, sex workers and students, commentator and writer Gugulethu Mhlungu examines how history has shaped the conditions women face today.

She concludes that there is still plenty of work to be done in making real the South Africa imagined by the Constitution.

As a writer, broadcaster and editor, Gugulethu Mhlungu is a respected voice in South Africa’s media space. In her role as contributing editor for Global Citizen, she is helping to advance the organisation’s vision of ending extreme poverty by 2030 and, as editor-in-chief of Careers magazine, to drive the narrative of young people’s welfare. She has held positions as deputy editor of Bona magazine, hosted NightTalk on Radio 702 and Breaking Dawn on Newzroom Afrika (DSTV channel 405). Mhlungu is also a public speaker, panellist and moderator, as well as a judge and mentor on the SABC 1 youth leadership show One Day Leader. In April 2015 she was identified by Marie Claire as one of the women to watch – in recognition of her use of various media platforms to nudge South African discourse towards substantive and thorough journalism.

Mhlungu has contributed to the Feminism Is collection of essays, to Ferial Haffajee’s What if there were no whites in South Africa and her work has appeared in a range of newspapers and magazines. During her tenure as lifestyle editor and writer for City Press #Trending arts and lifestyle supplement, it was named Arts Organisation of the Year three years in a row. Her personal accolades include a National Arts Festival/Business Art SA silver award for feature writing and Media 24 Legends Columnist of the Year, both in 2015.

Mhlungu has a Bachelor of Arts in Journalism & Media Studies and Anthropology from Rhodes University, as well as a post-graduate diploma in media management. She lives in Joburg.

You Have Struck a Rock: Women fighting for their power in South Africa is published by NB Publishers