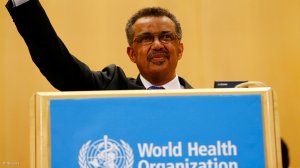 The World Health Organization (WHO) said on Friday that its current director-general Tedros Adhanom Ghebreyesus is the only candidate nominated for the UN agency's elections in May.

"WHO can announce that a single candidate was proposed by Member States by the 23 September 2021 deadline: Dr Tedros Adhanom Ghebreyesus, who is the incumbent Director-General," the WHO said in a statement.

Earlier on Friday, Reuters reported that Tedros was the only nominated candidate, citing Western diplomats.

Finance Minister Enoch Godongwana will table the national budget on 23 February, 2022. The ministry of finance on Thursday issued an advisory - highlighting that this would be the minister's "inaugural" speech. Godongwana was appointed finance minister in August 2021, relieving his predecessor, Tito Mboweni, who requested to step down. In a call with investors shortly after, Godongwana said he would lead differently to Mboweni but would stick to the fiscal framework. This was evident in the tabling of the medium-term budget policy statement, later in November. →