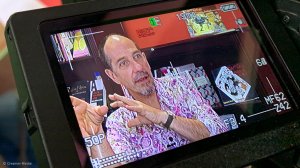 Zapiro unpacks his 2019 annual 'Which Side is Up?'. (Camera & Editing: Darlene Creamer)

Zapiro’s annual offering is our duplicity warning, our canary in the coalmine, our national conscience. Exposing and revealing, brilliantly appealing, Zapiro does it again!

It’s been a year of the Zondo Inquiry picking through the debris of the Gupta and Bosasa empires, uncovering State Capture while Zuma-era spooks frantically cover up; Pravin Gordhan joining the dots as the Public Protector peddles the Rogue Unit fantasy; exposés of Ace Magashule’s Gangster State, Juju and Floyd’s credit card looting and Iqbal Survé’s ego; an election which no party could call a victory; Trump tweeting, Brexit bumbling, SAA tail-spinning and Eskom’s financial big hole; President Ramaphosa seems shocked by it all – Zapiro just keeps on zapping.

Which Side is Up? is published by Jacana Media

A Taste for Life: How the Spur legend was born – Allen Ambor

‘A steakhouse is a theatre of the senses, and the opening act is the fire in the heat of the grill section, warming us, mesmerising us, drawing us closer, igniting in us a hunger for good food and good company. This is the story my hands have to tell, of the company they helped to build and the promise they helped to fulfil. The promise of A Taste for Life.’ Join Allen Ambor on a rock ’n’ roll ride through the restaurant business and pioneering days of franchising in South Africa. Ambor’s exuberance for life and exacting management style shine through on every page of this memoir of a man who went from being a hippy waiter to opening the first Spur in 1967 and growing it into an empire that included more than 500 franchises under the Spur, Panarottis, John Dory’s and RocoMamas brands. →