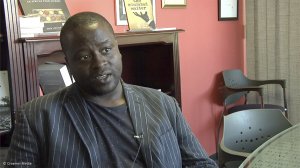 Tafadzwa Zimunhu Taruvinga, a young Zimbabwean, enrolls to study economics at Rhodes University in South Africa. As a foreign student, the fees are exorbitant, exacerbated by the fact that currency has become increasingly problematic in the ailing economy back home.

Determined to graduate with a Rhodes degree, Tafadzwa is prepared to do anything – from unpacking groceries to cleaning shit-splattered toilets and waitering for a pittance. Constantly cash-strapped, most nights he goes to sleep hungry. Sometimes he needs to be inventive when concocting a meal.

I poured the boiled water into the bowl of crumby Kellogg’s Cornflakes and carefully added a few granules of Knorr powder soup over the crushed smithereens. I mixed it all together, gnashed my teeth and forced down each bite with ample struggle. I was hungry.

For most it would be unfathomable, eating a meal that wasn’t one. But I wanted to graduate with a Rhodes University degree so badly that ‘Knorr cornflakes’ seemed like a reasonable supper to allay the aching pangs.

‘This is not so bad,’ I tried to convince myself as I forced down the putrid slush. In truth, it was horrible. I was all too aware that the inedible concoction was the price I must pay for my education.

When the plate was clean, I washed down the meal with a glass of warm water. Then I rinsed my zebra bowl, the plastic spoon and the glass and wiped them dry. For dessert, I wept quietly.

Tafadzwa’s drive to conquer a world steeped in impenetrable hardships and prejudice is inspirational. He is a multi-faceted man: a son, a brother, a husband, a father to be, an immigrant, a waiter, a Catholic, a rebel, a graduate, a man bent on self-destruction, a man seeking redemption. Above all Tafadzwa is a true survivor.

The Educated Waiter is a groundbreaking memoir giving voice to the previously unheard plight of the immigrant graduate. A go-getter African, Tafadzwa’s story is a powerful recollection of his quest to find a better life in South Africa, Germany, the UAE and Zimbabwe. Both witty and poignant, The Educated Waiter indefatigably confronts poverty, racism, xenophobia and classism, all the while making you laugh.

ABOUT THE AUTHOR
Tafadzwa Zimunhu Taruvinga is a Rhodes University economics graduate. Over the last decade he has written non-fiction prose, including motivational pieces for a local newspaper in Zimbabwe. Driven by his passion to tell African stories, he has self-published four books including The Redwood Poetry Collection and Serve Your Customers Excellently, Or Not At All! Tafadzwa has also worked and lived in Europe, East Africa and the UAE, where he has observed the unique ideologies and cultures of people from these regions. Tafadzwa presently lives in Johannesburg and spends his Christmases creating tasty gourmet indulgences for his mother and sisters at their family home in Harare, Zimbabwe.

The Educated Waiter: Memoir of an African Immigrant is published by Jacana Media

Making headlines: Energy department admits petrol price increase was wrong; Covid cases climb by 4 373, with majority being recorded in Gauteng; And, About 700 Soweto homes in the dark after Eskom disconnects its power →