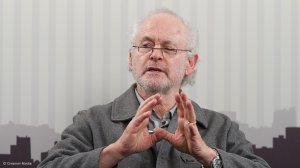 In this episode of Suttner's View, researcher and analyst Professor Raymond Suttner discusses Parliament in 1994 and the advancements it has made today.