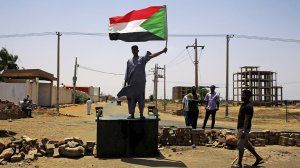 “In the early morning of Wednesday Lieutenant-General Mohamed Osman Al Hassan, the Army chief of staff, announced that army forces managed to control the mutinous forces with minimal losses, pointing to the death of two military and four wounded, including two officers during the assault on their sites,” the publication said.

The mutiny was sparked by protests over the amount of compensation to be paid out to members of the unit following the dissolution of the agency.

The uprising followed a spike in tension in the capital Khartoum on Tuesday when heavy gunfire broke out at the operations department of the General Intelligence Agency, closing nearby roads.

Similar exchanges of fire were reported in the suburbs of Khartoum and in El Obaid.

The RSF, comprising some former members of the Jinjaweed militia, are accused of driving genocide in Darfur. Last June the RSF opened fire on a peaceful, sit-in protest in Khartoum calling for the overthrow of ousted President Omar Al Bashir, killing over 100 people and injuring many more.

Several of its members face trial for their part in the massacre.

Bashir was sentenced to two years-imprisonment last December for corruption and is also wanted by the International Criminal Court in the Hague for war crimes in Darfur. The government in Khartoum has yet to agree to his extradition.