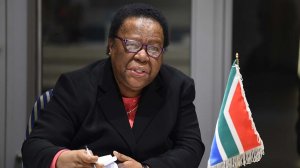 South African Minister of International Relations and Cooperation Dr Naledi Pandor said on Friday that as the country begins to turn towards rebuilding and recovering from the Covid-19 pandemic, it cannot afford to retreat if it wants to advance its own national interest.

Pandor was speaking during a webinar on South Africa’s role in the United Nations (UN), saying the country is currently faced with many contemporary challenges which requires cooperation and common intention.

In the next few days, world leaders and Ministers of Foreign Affairs, including Pandor, will converge in New York for the opening and general debate of the seventy-sixth Session of the UN General Assembly.

She highlighted that the Covid-19 pandemic had reminded South Africans why multilateral cooperation was so important.

For example, she noted that South Africa intended on developing its own Covid-19 vaccine and producing it locally, however, she said it would be a weakness if the country’s focus is only on itself.

Pandor went on to point out that the beginning of the pandemic saw the greatest amount of multilateral cooperation that had been witnessed for several years.

She said it had been witnessed with other contemporary challenges that no country acting alone could successfully deal with the pandemic.

Pandor said the pandemic claimed millions of lives around the globe, has deepened poverty, widened inequality gaps across nations and had affected Africa’s ability to pursue its Agenda 2063 and the UN’s ability to ensure programmatic implementation of the Sustainable Development Goals.

SA’s Role in the UN

“For us, the United Nations will always have a special meaning. South Africa has become the big defender of multilateralism in every opportunity that we have in the international sphere and we do this with a very clear purpose. We benefitted from and understand the potential role of the UN when united…,” said Pandor.

She said South Africa was privileged to serve thrice in the UN Security Council as a non-permanent member.

Pandor said South Africa had actively promoted adherence to the mandated role of the Security Council and had consistently, and sometimes at the cost of the country’s reputation, resisted attempts to convert it into a body that advanced the interests of the more powerful permanent members.

She explained that some of the more powerful members wanted to use the Security Council to advance their agenda and South Africa stood ready to refuse to condone this.

Eastern Cape Premier Oscar Mabuyane has approached the High Court in Bhisho to interdict the Hawks' investigation against him, calling the probe "unconstitutional, unlawful and invalid". In court papers, Mabuyane has asked for an order to set aside the decision to launch an investigation into "unspecified allegations" against him, claiming the Hawks are being used by his rivals in the African National Congress (ANC) to conduct a political witch-hunt against him. →