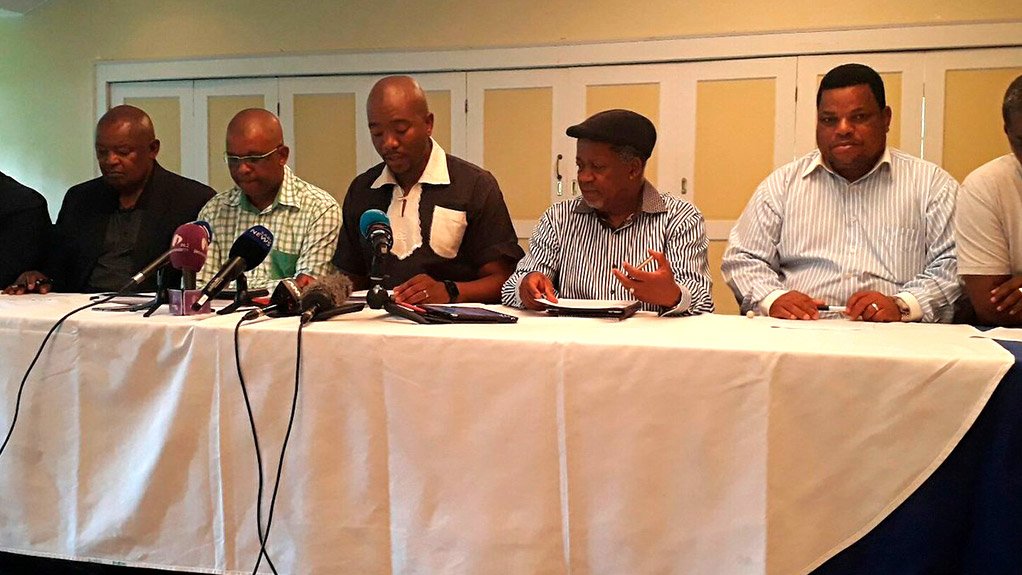 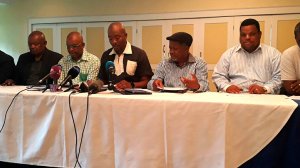 South Africa’s opposition parties would embark on a national march to the Union Buildings next week as part of their ongoing efforts to remove President Jacob Zuma from power.

DA leader Mmusi Maimane said the parties coming together to remove Zuma after the highly criticised Cabinet reshuffle last week that removed Pravin Gordhan and Mcebisi Jonas from their posts as minister and deputy of finance, was not about the governing African National Congress (ANC), but its leader and country’s head of the executive, Zuma.

“What we are saying in the short term, is that we are working to remove Zuma. All of us are fully behind [a] motion of no confidence against Zuma. This is not an academic exercise…we’re serious about this, this is why we came together collectively because we choose South Africa,” Mmusi said.

“This motion is not about the removal of the ANC…the ANC was voted into power by the majority of people of this country and through a democratic process which all of us respect…this is not a regime change, it is the removal of one man from power as a result of the crisis he keeps unleashing in this country.”

The leaders said they were confident their various ways of trying to unseat Zuma would be fruitful. This included mass action and protests and the EFF’s application to the Constitutional Court seeking the court to give a directive to Parliament to take action against the president after its landmark Nkandla ruling 12 months ago.

When asked whether the parties had identified ANC MPs whom they could persuade to vote with the opposition parties, UDM leader Bantu Holomisa said names were not discussed at the meeting.

“We did not discuss names in this meeting, you do know parties such as [the] South African Communist Party (SACP) have come out and denounced Zuma and urged him to resign. There are SACP members in Parliament and they must follow up on their statement… otherwise we will call them hypocrites if they do not follow on their calls,” he said.

Last week, EFF leader Julius Malema said the opposition parties would meet with every ANC MPs to make sure they were on their side. It was expected that most ANC MPs would abstain from voting in the motion of no confidence, and therefore give opposition parties the edge, said Malema.

EFF chairperson of its central command team Dali Mpofu said ANC MPs should listen to its own stalwarts who have been vocal against Zuma’s presidency.

“It is Zuma or South Africa. If ANC members should wake up and see that their own stalwarts, including Ahmed Kathrada said Zuma must step down…this is not about the ANC, it is about saving the country from people who want to plunge it into a wholly corrupt and captured State,” Mpofu said.

IFP’s Mangaqa Albert Mcwango said in the absence of ANC MPs’ courage to take action against Zuma, the parties had no choice but to try all avenues.

“The honours is with us the opposition to push that and we will continue to do so for as long as possible and as long as these shenanigans we see happening continue. It would have been nice if some members of the ANC were the ones leading on this.”

Cope leader Mosioua Lekota said the ANC has fully supported Zuma in his track record of “constantly undermining the constitution”.

“His first act was to recall president Thabo Mbeki without consideration for the constitution and rule of law. The only [reason] that has divided the ANC now is that for first time Zuma has shown contempt even to the leaders of the ANC themselves and that has opened their eyes…to the fact that he is a dictator who doesn’t follow the law but his whims and whiles.”

The national day of action next week would see the parties coming together with communities and march to the Union Buildings next week Wednesday where they would demand that Zuma resigns.

Maimane said they were waiting for National Assembly Speaker Baleka Mbete to respond urgently on the date for the motion of no confidence, and a court action would follow suit should Mbete’s response be unsatisfactory for the parties.

Mkhize: Covid-19 affects every race, doesn't matter if you're black or white

The coronavirus affects everybody and any attempt to racialise it is misleading, Health Minister Zweli Mkhize said in response to a question by an Economic Freedom Fighter (EFF) MP, who wanted a demographic breakdown of Covid-19 infections.   Mkhize briefed members of the National Council of Provinces on Tuesday on the government's response to the coronavirus pandemic. →