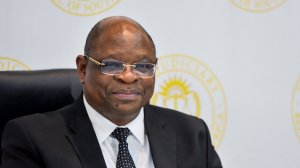 Considering "all other factors", President Cyril Ramaphosa concluded that Justice Raymond Zondo was the best person to take up the position of chief justice.

In March, Ramaphosa appointed Zondo as chief justice, even though the Judicial Service Commission (JSC) recommended Judge Mandisa Maya for the position.

"I considered the great value in ensuring continuity and certainty in the leadership of the judiciary, and the important role the judiciary plays in ensuring trust and faith in state institutions," Ramaphosa said.

The president said he also based his decision on the provisions of the Constitution.

Furthermore, Section 174 of the Constitution requires that persons appointed as judicial officers be fit and proper persons, and that those appointed to the Constitutional Court must be South African citizens.

Section 174 further requires that the judiciary must reflect broadly the racial and gender composition of South Africa and that this must be considered when judicial officers are appointed.

"These are among the factors that were relevant to my choice of who should be the next chief justice," Ramaphosa said.

He also had the input of the political parties represented in Parliament as well as the contents and outcomes of the JSC interviews.

"The Constitution does not give primacy to any of those entities and persons that I am enjoined to consult. I exercised my constitutionally granted discretion, taking into account all factors, in coming to the determination that Justice Raymond Zondo is the best person to be our next chief justice," Ramaphosa said.

In March, Zondo told News24 that he knew that his work in chairing the State Capture Inquiry might put him out of the running as the next leader of SA's judiciary – but he was adamant that he had to keep doing it anyway.

The Presidency announced Zondo's appointment in March, less than two weeks after the release of the third State Capture Inquiry report, which made damning findings of how facilities management company Bosasa had secured multibillion-rand tenders through bribes and gifts to high-ranking African National Congress (ANC) members.

While the ANC has publicly expressed support for Ramaphosa's decision to appoint Zondo and to nominate Supreme Court of Appeal President Mandisa Maya as his deputy, the EFF responded to the news with a three-page statement, which was littered with insults, dishonest hyperbole and completely unsubstantiated accusations.