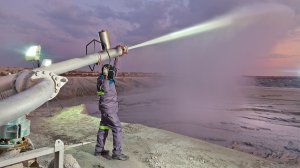 In an operational update for the year ended June 30, the London-, Johannesburg- and now also New York-listed company reported that it was heading towards a position of being debt-free within the next 12 months.

Earlier this month, the midtier gold producer announced that it had established a sponsored Level-1 American depository receipt (ADR) programme on the over-the-counter market in the US with the Bank of New York Mellon being the appointed depository. In doing so, Pan African joined a number of its peers that have successfully implemented an ADR programme that bolsters its London Aim and Johannesburg JSE positions.

Moreover, the Barberton Mines achieved three-million fatality-free shifts during June 2020, a record for the past decade, with stringent policies and protocols at all operations to deal with the ongoing Covid-19 pandemic.

Steady state production was achieved at Evander’s 8 Shaft pillar during June, with expected production of 30 000 oz/y for the next three years.

Development into the first target block on 42 level of Barberton’s New Consort Mine – Prince Consort Shaft was completed during June 2020, with highly prospective grades recovered during the last month.

As Mining Weekly also reported separately, the board has approved the construction of a 10 MW solar power plant at the Elikhulu gold-from-tailings operation that is expected to reduce electricity costs materially after its 12-month construction period.

Detailed scheduling and funding options are under way for Evander’s Egoli gold project, which is expected to contribute incremental annual production of between 60 000 oz and 80 000 oz over its minimum nine-year life, with steady state annual production of 72 000 oz in year two, at an all-in sustaining cost (AISC) of under $1 000/oz. Excluded in these calculations are inferred mineral resources of 6.26-million tonnes at 9.68 g/t (1.95-million ounces) that will be accessed once underground development is in place.

With a long Covid-19 battle expected, CEO Cobus Loots intends to continue to implement preventative and precautionary operational measures rigorously to ensure the health and well-being of employees.

“We’ll respond rapidly and in a considered manner where occurrences of Covid-19 are identified. We’ll also continue our relief efforts to assist the most vulnerable in our areas of operation. We need to remain unrelenting in the pursuit of our ultimate goal of ‘zero harm’ in the year ahead,” Loots stated.

Environment, social and governance initiatives have been prioritised further through increased expenditure on rehabilitation and sustainable development projects that include large-scale agricultural projects at Barberton Mines, and the initiation of a feasibility study for a solar plant at Barberton Mines.

Operational optimisation and balance-sheet de-gearing underpin the company’s intention of increasing dividends in the years ahead.

Initiatives to improve production and reduce unit costs at its higher cost operations include:

Mid-tier platinum group metals producer Royal Bafokeng Holdings on Tuesday reported sky-rocketed earnings on lower Covid-19-impacted half-year production. The JSE-listed company’s earnings before interest tax depreciation and amortisation in the six months to June 30 soared 297.2% to more than R2-billion, and headline earnings rocketed 624.7% to R862.6-million, compared with a R164.4-million loss in the first half of last year. Basic headline earnings per share were up 573.6% to 335.3 c a share. →