My Father Died For This – Lukhanyo & Abigail Calata

My Father Died For This – Lukhanyo & Abigail Calata 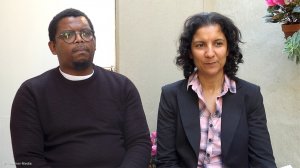 When the Cradock Four’s Fort Calata was murdered by agents of the apartheid state in 1985, his son Lukhanyo was only three years old.

Thirty-one years later Lukhanyo, now a journalist, becomes one of the SABC Eight when he defies Hlaudi Motsoeneng’s reign of censorship at the public broadcaster by writing an open letter that declares: my father didn’t die for this.

Now, with his wife Abigail, Lukhanyo brings to life the father he never knew and investigates the mystery that surrounds his death despite two high-profile inquests.

Join them in a poignant and inspiring journey into the history of a remarkable family that traces the struggle against apartheid beginning with Fort’s grandfather, Rivonia trialist and ANC Secretary-General Rev James Calata.

Lukhanyo Calata is a television journalist, who worked for eNCA before joining the SABC’s parliamentary office. He lives in Cape Town.

Abigail Calata is a journalist who has worked for Beeld as a political reporter and parliamentary correspondent, Die Burger and the University of Cape Town’s Law Faculty. She lives in Cape Town.

My Father Died For This is published by NB Publishers