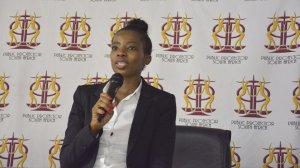 Mkhwebane’s office stated that National Assembly Speaker Thandi Modise was informed of the leave and had given Mkhwebane the green light.